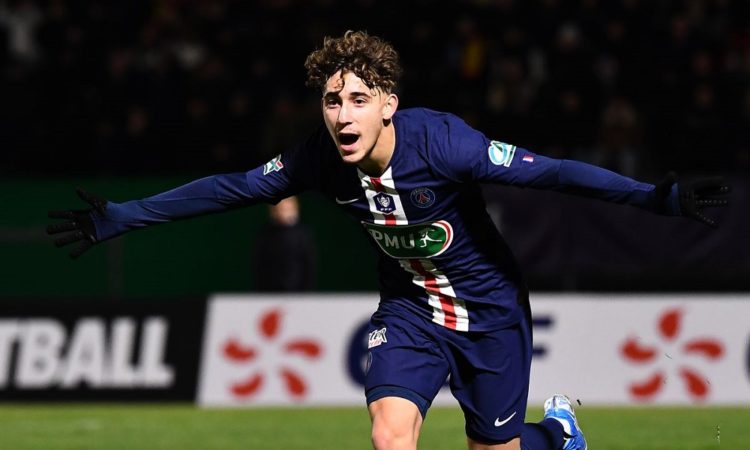 Arsenal have been boosted in their attempts to sign Adil Aouchiche after the highly-rated midfielder informed Paris Saint-Germain he wants to leave the club this summer, according to reports in France via the Daily Mail.

Aouchiche has been at PSG since he joined the club’s youth system in 2014 and he’s emerged from the ranks as one of the most exciting young talents in French football following a string of impressive displays for club and country.

The 17-year-old has been capped 12 times at U18 level for France after scoring 16 goals in 25 appearances at U17 level and he’s broken into Thomas Tuchel’s first team squad at PSG with 1 goal in his 3 appearances so far.

However, it looks like Aouchiche isn’t happy with the number of opportunities he’s been given in Paris as the Daily Mail are citing a report from RMC Sport that claims the teen star has informed PSG he wants to leave this summer.

The news will come as a huge boost to Arsenal as the report says Mikel Arteta is desperate to sign Aouchiche as he looks to overhaul his struggling squad and he wants the youngster to be part of his revolution at the Emirates.

Arsenal have endured a disastrous campaign and are struggling to even qualify for the Europa League following Saturday’s defeat to Brighton so Arteta knows he needs to make big changes to his squad if the Gunners are to build a competitive side again.

However, Arteta will be working on a shoestring budget as money is going to be tight at the Emirates Stadium due to the current financial climate so a cut-price deal for Aouchiche will certainly be appealing.

The teenager’s youth contract expires at the end of the month and it appears he won’t be signing a professional deal with PSG so Arsenal can snap him up without the need to pay a big transfer fee.

The newspaper says the attacking midfielder wants a contract worth £22,000-a-week and his sign-off fee would be in the region of £3.6m so the transfer would definitely be within Arsenal’s reach if the player opts for a move to London.

We’ll have to wait and see how things develop as Arsenal will need to fight off competition from other French clubs for his signature but Aouchiche would be an exciting addition to Arteta’s squad if the Gunners can lure him to England this summer.