Granit Xhaka could return in midfield when Arsenal take on Southampton

Goalkeeper: Bernd Leno has been ruled out for at least four weeks after suffering a knee injury during Arsenal’s defeat at Brighton. Emi Martinez is now set to deputise between the sticks so he’ll be looking to take his opportunity to impress.

Defence: David Luiz will serve the second game of his two-match ban while Pablo Mari has been ruled out for up to three months with an ankle ligament injury that he picked up against Manchester City last week.

Sokratis will face a late fitness test after missing the last two games with a thigh problem and Calum Chambers remains out so Rob Holding could continue alongside Shkodran Mustafi tomorrow night.

Hector Bellerin should keep his place at right-back as Cedric Soares is still out but we could see a change on the opposite side of defence as Kieran Tierney is expected to be recalled at left-back with Sead Kolasinac making way.

Midfield: Arsenal will make a late call on Granit Xhaka after he missed the Brighton game with an ankle injury but the Swiss international is expected to be passed fit to return in the middle of the park tomorrow.

Matteo Guendouzi is the man likely to drop out after he made the headlines for the wrong reasons following a clash with Brighton striker Neal Maupay on Saturday. Lucas Torreira is still two weeks away from returning from an ankle injury so Dani Ceballos should keep his place.

Mesut Ozil is pushing for a recall after not featuring in either game against City or Brighton but Bukayo Saka impressed in a more central role at the weekend and I think he’ll keep his place. That means Joe Willock will also settle for a place on the bench.

Attack: Nicolas Pepe showed his quality with another fine goal against Brighton so he may have done enough to keep his place on the right wing which means Reiss Nelson would remain among the Arsenal subs.

Arteta seems determined to use Pierre-Emerick Aubameyang from the wing so he’ll probably start from the left tomorrow with Gabriel Martinelli ruled out for several months with a knee injury.

Alexandre Lacazette started against Brighton and although he didn’t have his best game, I still think his link-up play with Aubameyang means he should keep his place ahead of youngster Eddie Nketiah. 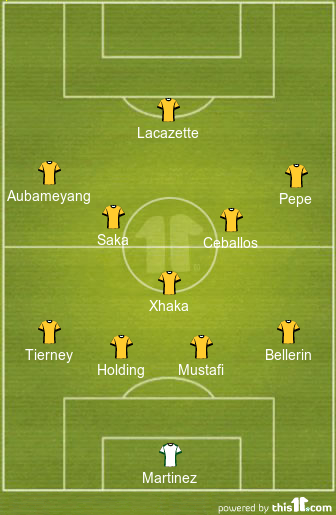