Manchester United take on Norwich City in the FA Cup at Carrow Road on Saturday evening. Here is the line-up we think Ole Gunnar Solskjaer will select for the game:

Goalkeeper: David De Gea bounced back following his error at Tottenham with a clean sheet on Wednesday night but Sergio Romero is being tipped for a recall on Sunday as he’s started all four of United’s FA Cup games this season.

Defence: Victor Lindelof was passed fit to start against Sheffield United in midweek after being forced off with a knock against Spurs. The Swede might be given a rest on Sunday with Eric Bailly pushing to start alongside Harry Maguire in the middle of defence.

Aaron Wan-Bissaka should continue at right-back ahead of Diogo Dalot but we might see a change on the left with Brandon Williams coming in for Luke Shaw. Phil Jones and Axel Tuanzebe remain out with knocks.

Midfield: Manchester United are expected freshen things up in midfield with Scott McTominay coming back into the side after he was rested against Sheffield United. Nemanja Matic impressed last time out but he’s likely to drop to the bench on Sunday.

Paul Pogba started against the Blades after only being used as a substitute against Tottenham and the Frenchman will be looking to build-up his match fitness with another run out this weekend.

Fred is pushing for a recall after being left out against Sheffield United and Solskjaer may decide to take the opportunity to rest Bruno Fernandes as he’s started the last three games in succession. With another important league game on Tuesday, United will need to keep Fernandes fresh.

Attack: Anthony Martial will be high on confidence after scoring his first hat-trick in midweek so the Frenchman should continue to lead the line up front. That means Odoin Ighalo may have to settle for a place among the substitutes again.

Marcus Rashford should keep his place in the Manchester United attack but we may see Solskjaer freshen things up on the right wing with Daniel James coming in for Mason Greenwood.

Jesse Lingard is back in contention after recovering from illness and Solskjaer says he’ll be involved against Norwich, but the midfielder will most likely have to settle for a place on the bench alongside Juan Mata. 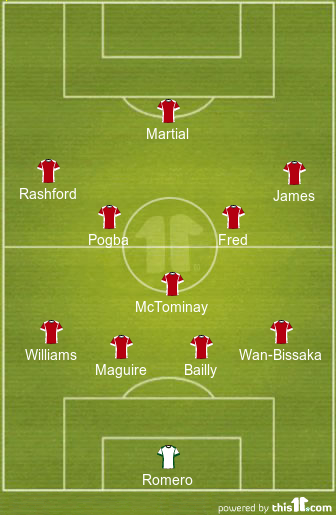