Arsenal will be looking to continue their recent good run when they take on Wolves at Molineux Stadium on Saturday evening.

After losing their first two games back following the restart last month, Arsenal have bounced back with consecutive Premier League wins over Southampton and Norwich while they’ve booked their place in the FA Cup semi-finals with a win over Sheffield United.

However, the Gunners head into the weekend action sitting eighth in the table and eight points adrift of the top four so Mikel Arteta desperately needs another victory tomorrow if the north Londoners are to make a late push for a Champions League qualification place.

Fifth could be good enough if Man City’s ban appeal is rejected and Wolves are right in the mix as they currently sit level on points with fifth-placed Manchester United – six points clear of Arsenal – after beating Aston Villa last week.

A win for Nuno Espírito Santo’s men tomorrow evening would move Wolves level on points with third-placed Leicester but defeat would see Arsenal close the gap to just three points so it’s all to play for at Molineux this weekend.

Arsenal could welcome Lucas Torreira back into the squad after he returned to full training following six months out with an ankle injury, however, a place on the bench is probably the best he can hope for.

Mesut Ozil has missed the last two matches with a back problem so he remains a doubt while Matteo Guendouzi is unlikely to feature having been frozen out of the squad by Arteta due to concerns over his attitude.

Bernd Leno remains on the sidelines with a knee injury while Gabriel Martinelli and Pablo Mari have both been ruled out for several months so they join Calum Chambers on the long-term injury list.

Arteta is expected to freshen things up with the likes of Cedric Soares, Rob Holding, Bukayo Saka, Nicolas Pepe and Eddie Nketiah all pushing for recalls to the starting eleven.

As for Wolves, they have no fresh injury concerns to deal with so Santo has a fully-fit squad to choose from. Adama Traore is pushing for a start but may have to settle for a place among the subs tomorrow. 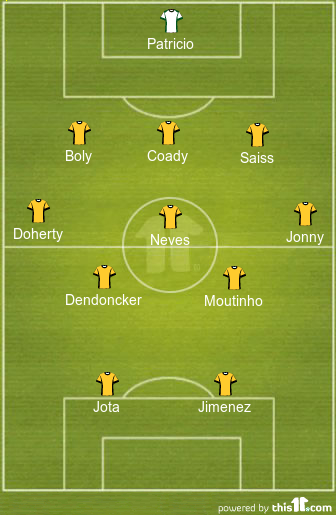 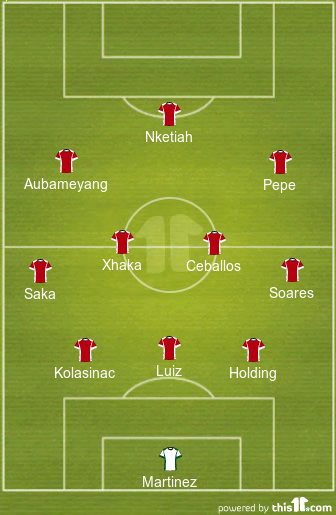 Wolves 1-1 Arsenal: Wolves are absolutely flying right now and have a real chance of crashing the top four/five if they can win this game. However, Arsenal are also in desperate need of points to boost their own European ambitions so it’s going to be an intriguing game.

It will be interesting to see how Arsenal cope if they continue with three at the back as Wolves have become experts using that system in recent years. The quality of Pierre-Emerick Aubameyang could be the difference for Arsenal but I’m going to back the points to be shared in a 1-1 draw.