– Trent Alexander-Arnold should return for Liverpool against Arsenal tomorrow night

Liverpool take on Arsenal at the Emirates Stadium on Wednesday night. Here is the team we expect Jurgen Klopp to select for the game:

Goalkeeper: Alisson Becker is expected to keep his place between the sticks once again so Adrian will have to settle for a place among the substitutes.

Defence: Liverpool are set to recall Trent Alexander-Arnold after he was rested for the draw with Burnley at the weekend while Andrew Robertson should keep his place at left-back so youngster Neco Williams will be the man to make way.

Joel Matip remains out with a foot injury that will prevent him from playing again this season but Dejan Lovren is an option if Klopp want’s to freshen things up at centre-back. However, I think Joe Gomez will keep his place alongside Virgil van Dijk in the middle of the back four against Arsenal tomorrow.

Midfield: Liverpool are without skipper Jordan Henderson as he’s been ruled out of the final three matches with a knee injury while James Milner is expected to miss out once again with a niggling hamstring injury.

However, Klopp still has options and is expected to rotate once again against Arsenal with Naby Keita set for a recall after being named on the bench for the 1-1 draw with Burnley at Anfield last time out.

Alex Oxlade-Chamberlain could also come back into the Liverpool team as he’ll be keen to impress against his old side having spent six years at Arsenal so Gini Wijnaldum could make way.

Youngster Curtis Jones is also expected to drop back to the bench after making his full Premier League debut at the weekend but Fabinho should keep his place in the holding role.

Attack: Liverpool are still gunning to reach the 100 point mark this season so I don’t see Klopp making too many changes to his favoured front-three against Arsenal tomorrow night.

Roberto Firmino will be looking to improve upon his relatively poor goal-scoring numbers while Sadio Mane should also start in attack along with Mohamed Salah – who’ll be desperate to get on the score-sheet as he looks to win the Golden Boot.

Divock Origi, Takumi Minamino, Harvey Elliott and Xherdan Shaqiri will all be options for Klopp from the bench if he needs to freshen things up. 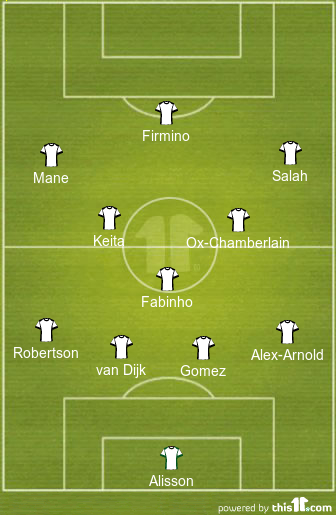