Arsenal take on Manchester City in the FA Cup semi-final at Wembley Stadium on Saturday night [7.45pm kick off].

The Gunners gave their hopes of qualifying for the Europa League a major boost after beating Premier League champions Liverpool 2-1 at the Emirates on Tuesday after capatalising on two errors from Virgil van Dijk and Alisson Becker.

The North Londoners still sit ninth in the table but are just three points off sixth, and with seventh good enough to qualify for Europe, Arsenal could still secure Europa League qualification if they win their last two league games.

However, Mikel Arteta has another viable route into Europe as winning the FA Cup would also secure Europa League football next season so the Arsenal boss has another incentive to try and reach the final by beating old club Man City tomorrow night.

However, obviously it’s going to be a tall order as City have been in terrific form since the restart having won seven of their nine games and Pep Guardiola’s side ran out comfortable 3-0 winners when they faced Arsenal last month.

Arsenal will continue to be without Bernd Leno due to a knee injury while Gabriel Martinelli has been ruled out for the rest of the season after undergoing surgery on a knee injury that he suffered in training.

Pablo Mari and Calum Chambers are also on the sidelines and Cedric Soares is cup-tied having already played for Southampton in the FA Cup back in January so Hector Bellerin will be recalled at right-back.

Eddie Nketiah will serve the final game of his three-match suspension while Matteo Guendouzi isn’t expected to be involved after being frozen out by Arteta. Mesut Ozil has declared himself fit but it remains to be seen whether he’ll be recalled to the Arsenal squad.

Manchester City have confirmed they will be without number two goalkeeper Claudio Bravo as he’s out with a muscle injury so Ederson will remain on goal this weekend.

Joao Cancelo is available again after recovering from a minor muscle issue but Sergio Aguero is ruled out with a knee injury that will keep him out for the rest of the season.

Raheem Sterling, Aymeric Laporte, Rodri, Kevin De Bruyne and Riyad Mahrez are all pushing for recalls after being benched for the win over Bournemouth in midweek. 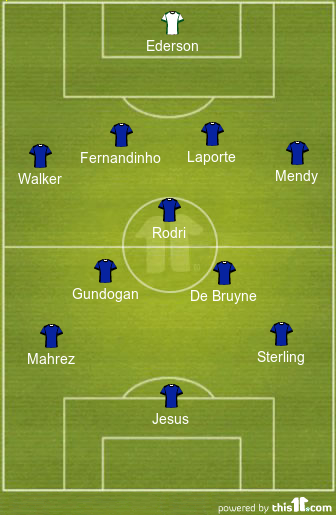 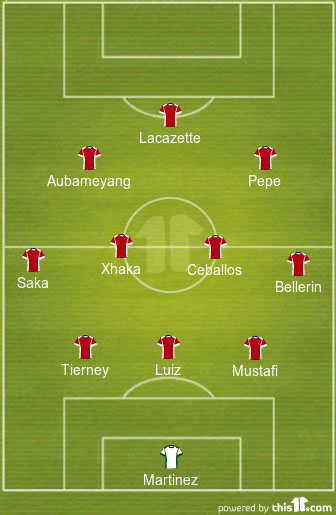 Arsenal 1-2 Man City: Arsenal showed on Tuesday night that they can dig deep and defend resolutely against a top class team after holding Liverpool at bay for the majority of the game so Arteta will be hoping for another similar display tomorrow.

The problem is in a one-off game like this the onus is to attack and Man City will just pick Arsenal off. I do think Arteta will give his mentor Pep Guardiola a good game and Arsenal have the tools to cause City problems. However, I think the Citizens will be too good in the end.