Defence: Arteta should stick with a back three after two excellent defensive performances by Arsenal during wins over Liverpool and City but the Gunners boss may be forced to make one change against Villa after Shkodran Mustafi limped off at Wembley with a hamstring issue.

Rob Holding is the man expected to come in for Mustafi and he’ll line-up alongside David Luiz – who was excellent in the FA Cup semi-final. Kieran Tierney has also impressed on the left side of the back three recently so I expect he’ll keep his place ahead of Sead Kolasinac.

Midfield: Cedric Soares could be recalled in the right wing-back role after being cup-tied against Man City so Hector Bellerin may be given a breather for the trip to Villa Park.

Ainsley Maitland-Niles put-in a superb performance on Saturday despite playing in an unfamiliar position but I still think Bukayo Saka will be recalled in the left wing-back role against Aston Villa.

Dani Ceballos gave a lot against City so Arteta might want to give the Spanish midfielder a rest with Lucas Torreira coming-in alongside Granit Xhaka in the middle of the park.

Matteo Guendouzi won’t be involved again after being frozen out of the Arsenal squad following a bust-up with Arteta but Joe Willock should be an option from the bench.

Attack: Pierre-Emerick Aubameyang was the hero once again after scoring two wonderful goals in the FA Cup semi-final so he should keep his place on the left side of the Arsenal attack tomorrow night.

Alexandre Lacazette has had to play a lot of minutes recently while Eddie Nketiah was suspended but the youngster is available again so he could be given a recall with Lacazette handed a well-earned rest.

Nicolas Pepe did well against City after setting-up the first goal with a lovely cross but Arteta might want to give him a breather so Reiss Nelson is in-line for a recall on the right wing.

Mesut Ozil is back in contention after declaring himself fit but a place on the bench is probably the best he can hope for while Gabriel Martinelli remains out with a knee injury. 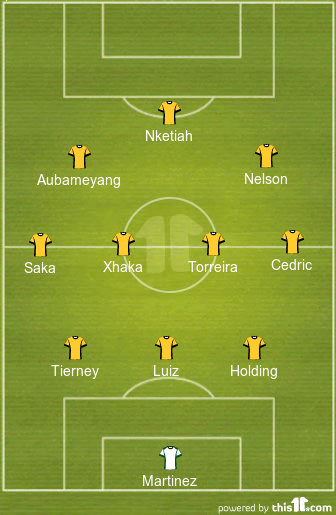