Arsenal take on Watford at the Emirates Stadium on Sunday afternoon in their final league game of the season. Here is the team Gooner Mac expects Mikel Arteta to select:

Goalkeeper: Bernd Leno is back in light training after recovering from a knee injury but this game comes too soon so Emi Martinez will continue between the sticks this weekend.

Defence: Arteta has deployed a back three in recent weeks and is expected to stick with that system for the FA Cup final next weekend so the boss is highly unlikely to change things around on Sunday.

Shkodran Mustafi has joined Pablo Mari and Calum Chambers on the sidelines as he’s set to miss Arsenal’s final two matches with a hamstring injury. Arteta is likely to field his best defence on Sunday so they get another game together ahead of the final.

Therefore, I expect we’ll see David Luiz keeping his place in the middle of the back three with Rob Holding starting on the right side. Kieran Tierney was rested for the 1-0 defeat at Aston Villa on Tuesday night so he’s set for a recall with Sead Kolasinac making way.

Midfield: Cedric Soares failed to take his opportunity in the right wing-back position in midweek so I expect Hector Bellerin to be recalled while Bukayo Saka should keep his place on the left – although Ainsley Maitland-Niles is another option for Arsenal.

Granit Xhaka is due a recall after being rested at Villa. Lucas Torreira was subbed off at half-time during that game so I think the Uruguayan international will be named among the substitutes on Sunday with Xhaka starting alongside Dani Ceballos.

Matteo Guendouzi won’t be involved again as he continues to be frozen out of the squad but Joe Willock should be an option from the bench.

Attack: Pierre-Emerick Aubameyang could perhaps be rested ahead of the FA Cup final but the Gabon international is still gunning for the Golden Boot so Arteta may give his skipper a chance to get among the goals on Sunday.

Alexandre Lacazette has played a lot of minutes recently so he could do with a breather in preparation for the Chelsea game. Therefore, Eddie Nketiah could move up front on Sunday after struggling on the wing against Villa.

Arsenal severally lacked any creative edge on Tuesday so I think we’ll see Nicolas Pepe recalled on the right wing. Reiss Nelson will need a late fitness test after missing the Villa game with a groin problem.

Mesut Ozil is still being overlooked despite being fit and available for selection. Given our lack of creativity it would probably make sense to have Ozil on the bench but it remains to be seen whether Arteta will bring him back into the fold. 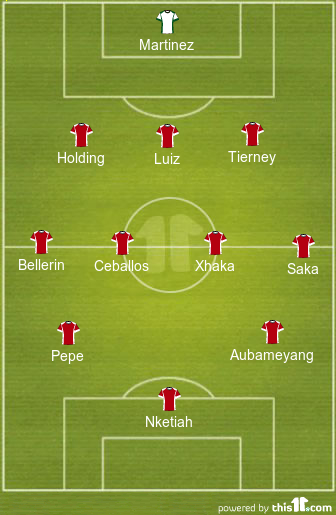