Chelsea take on Arsenal in the FA Cup final at Wembley on Saturday evening. Here is the team we expect Frank Lampard to select for the game:

Goalkeeper: Kepa Arrizabalaga was axed for Chelsea’s final Premier League game of the season after making a string of errors in recent months. Willy Caballero kept a clean sheet during the 2-0 win over Wolves last week so he’s expected to keep his place tomorrow.

Defence: Chelsea have deployed a back three in the last few matches and Lampard is expected to stick with that system against Arsenal. Kurt Zouma has been in favour again recently so he should keep his place at Wembley.

Antonio Rudiger is also expected to start for the Blues while Cesar Azpilicueta should start on the right-side of the back three so Andreas Christensen and Fikayo Tomori will have to settle for places on the bench.

Midfield: Marcos Alonso’s long-term future at Stamford Bridge may be in doubt but he’s still expected to keep his place in the left wing-back position tomorrow while Reece James should start on the right.

Chelsea have been handed a huge boost as N’Golo Kante has been passed fit to return after recovering from a niggling thigh injury that’s hampered him in recent weeks so he’s expected to start against Arsenal.

Mateo Kovacic is favourite to keep his place in the middle of the park so Jorginho is the man most likely to make way and he’ll drop to the bench where he’ll join Ross Barkley. Ruben Loftus-Cheek has been ruled out with a knock and Billy Gilmour won’t be involved against the Gunners as he’s still recovering following knee surgery.

Attack: Olivier Giroud is almost certain to keep his place up front as he’s been in excellent form lately. The Frenchman has scored six goals in his last six games so he’ll be hoping to continue that form against former club Arsenal.

Christian Pulisic should keep his place on the left side of the Chelsea attack after regaining full fitness recently but it will be interesting to see who Lampard goes for on the opposite flank.

Mason Mount will hope he’s done enough to keep his place for the FA Cup final after scoring against Wolves last weekend, however, Willian is available again after missing the game last week with a knock.

The Brazilian is set to leave the West Londoners after failing to agree terms over a new contract so this could be his last game in a Chelsea shirt and I think it will be difficult for Lampard to leave him out as he’s arguably been Chelsea’s best player in recent months.

Tammy Abraham will have to settle for a place among the Chelsea substitutes where he’ll be joined by Callum Hudson-Odoi and Pedro. 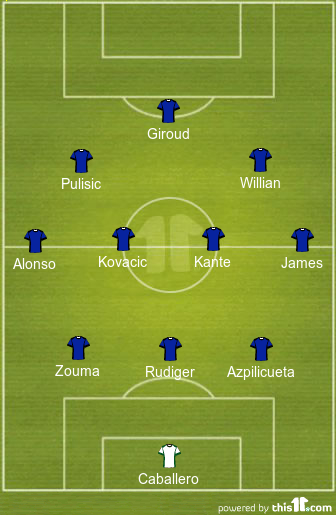