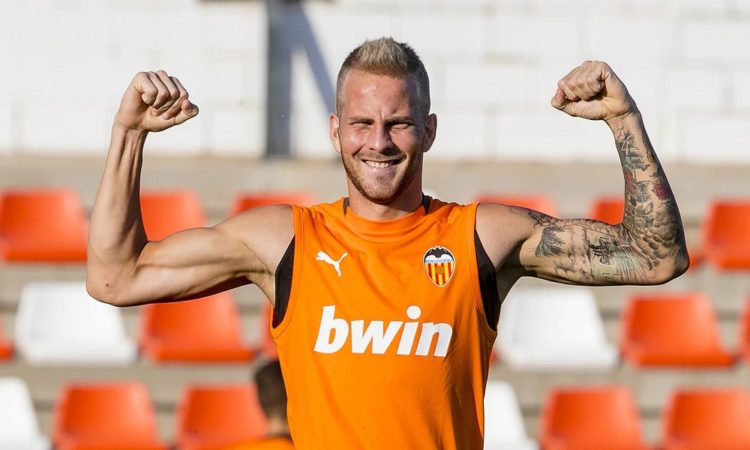 Manchester United are eyeing a surprise swoop to sign Valencia midfielder Uros Racic this summer in a deal that could be worth around £28m, according to The Sun.

Ole Gunnar Solskjaer has endured a frustrating transfer window so far as the United boss has only managed to sign Donny van de Beek from Ajax and has struggled to land any of his other key targets.

However, the Norwegian coach is expected to be active in the market over the coming weeks as he looks to build a squad capable of competing with the likes of Liverpool and Manchester City this season.

It appears he’s looking to sign another central midfielder and The Sun claims that Manchester United are considering making a move to sign Racic after keeping tabs on the 22-year-old in recent years.

Racic has a £92m release clause in his contract but the newspaper suggests a deal could be done at around £28m due to Valencia’s financial issues so the La Liga outfit would be prepared to cash-in if an offer arrived.

The former Serbian U21 international has struggled to settle since joining Valencia from Red Star Belgrade in 2018 and has spent time out on loan at Tenerife and Famalicao over the past two years.

However, he’s seemingly done enough to catch the eye of United scouts and the 6ft 4in box-to-box midfielder is known for his power, work ethic and terrific footwork so it would be interesting to see how he’d develop under Solskjaer.

Racic could be viewed as a long-term replacement for Nemanja Matic if he does end up moving to Old Trafford but he’d still face plenty of competition as the likes of van de Beek, Paul Pogba, Fred, Scott McTominay and Bruno Fernandes are also vying for places in the middle of the park.

We’ll have to wait and see how this transfer story develops over the coming days but some fans may be surprised if United do end up splashing around £28m on a relatively unknown central midfielder given how well-stocked they are in that department.

Solskjaer has been trying to strengthen his attack this summer so some fans may feel the club should be using the money to put towards a potential deal for Jadon Sancho instead.