Mikel Arteta has provided an update on whether Kieran Tierney will be available for Arsenal’s trip to Manchester City while new signing Thomas Partey could make his debut this weekend.

Tierney is currently self-isolating in Scotland after being in close contact with Stuart Armstrong shortly before the Southampton star tested positive for Covid-19 while away on international duty.

It was revealed that Tierney had been playing computer games in a hotel room with Armstrong but was sat over 2 meters away from his team-mate and has returned several negative tests over the past few days.

Scottish Government imposed restrictions mean Tierney is being forced to remain north of the border while he self-isolates but Arsenal are in talks with authorities about bringing the left-back to London via private car.

Further talks are due to take place this afternoon and Arteta is hopeful Tierney will be given the green light to return to England and be in contention to face Manchester City on Saturday evening.

Speaking at his pre-match press conference today, the boss is quoted as saying by Goal.

“I hope so [Tierney will face City]. This is getting very complicated when you are sending players abroad and obviously you lose control.

“Some authorities have different regulations to the actual ones in the Premier League. We are still having some discussions with the authorities and hopefully we will know more this afternoon.”

It would be a big blow for Arsenal is Tierney is ruled out of the trip to the Etihad Stadium as he’s been a key player for Arteta so far this season having finally returned to full fitness following a frustrating debut season at the club. 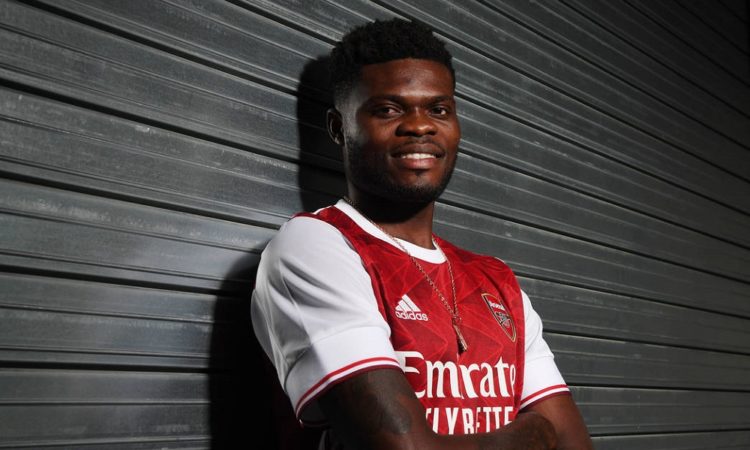 Elsewhere, Arteta has revealed Thomas Partey will take part in his first training session with his new team-mates today and a late decision will be made over his availability against Manchester City this weekend.

Partey sealed a £45m move to Arsenal on deadline day last week and only arrived at London Colney on Tuesday following the international break but Arteta says the midfielder is fit and keen to play at City so could be in-line to make his debut.

Arteta is quoted by Goal as saying:

“He is getting familiar with everything around the club, today [Thursday] he will have his first session, so everything has to come really quickly for him. He is fit, he is very willing to start playing, so we will how he goes in the next few days.”

Partey is expected to become an important part of Arteta’s line-up this season but it remains to be seen whether he’ll be rushed in to face City or given more time to settle-in to life in England before being handed his first start.

Arsenal head to the Etihad Stadium sitting fourth in the Premier League table after winning three of their opening four games so Arteta will hope to continue their good form with another positive result against his former club.