Manchester United begin their Champions League campaign when they take on PSG in Paris on Tuesday night. Here is the line-up we think Ole Gunnar Solskjaer will select for the game:

Goalkeeper: Dean Henderson may be hoping he’ll get some opportunities in the cup competitions this season but I still think David De Gea will retain the gloves for this difficult trip to the French capital tomorrow night.

Defence: Solskjaer usually plays with a back four but the United boss has reverted to a three in several big away games and did so when they last met PSG so I wouldn’t be surprised if the Norwegian opts to play with three centre-backs on Tuesday.

Harry Maguire put-in an improved performance against Newcastle so he’ll keep his place while Victor Lindelof is likely to start. Luke Shaw could be moved to the left side of the three but he was poor again at Newcastle so Eric Bailly could be recalled against PSG.

Aaron Wan-Bissaka should keep his place and push slightly further forward into the right wing-back role while Alex Telles could be handed his full debut on the opposite flank. The Brazilian is one of the best attacking full-backs in Europe so he should be well suited to playing a wing-back role.

Midfield: Manchester United are expected to make changes in midfield as Paul Pogba will be recalled after being rested for the win at Newcastle United on Saturday night.

Nemanja Matic is also likely to come back into the side so Fred and Scott McTominay are set to drop to the bench. Donny van de Beek made a good impact off the bench at the weekend but I still think he’ll have to wait to make a start.

Attack: Anthony Martial is set for a recall up front after being suspended for the Premier League trip to St James’ Park at the weekend so the Frenchman should be fresh. Edinson Cavani is likely to be in the squad but a place on the bench is the best he can hope for as he’s still lacking fitness.

Marcus Rashford should move out to the left wing which will mean Daniel James dropping to the bench. Bruno Fernandes was Man Utd’s star player once again on Saturday so the Portuguese international should keep his place in attack.

Mason Greenwood missed the win over Newcastle due to a knock and he’ll need to be assessed ahead of this game so the youngster is unlikely to start. Juan Mata could drop out if Solskjaer does switch formation to a back three. 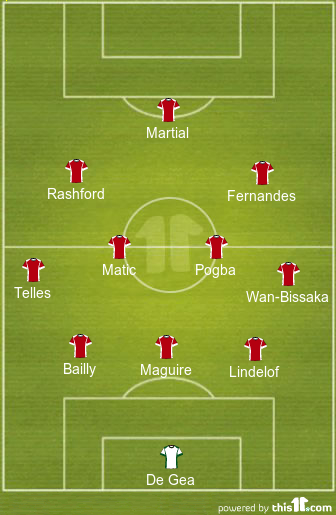