Jose Mourinho will demand a determined effort from his side when Tottenham return to Europa League action against Ludogorets on Thursday evening [kick-off 17:55 pm].

Spurs were dire in their last Europa League game against Royal Antwerp and rightfully returned empty-handed from Belgium following their 1-0 defeat. Mourinho was deeply annoyed and he claimed that he would make tough choices regarding his team selection.

Here is the team we expect Mourinho to select for the game:

Goalkeeper: Joe Hart missed the game in Belgium last week but he should be given a chance to make an impact tomorrow. The former England goalkeeper is likely to take his position between the sticks with Hugo Lloris dropping to the bench.

Defence: Mourinho has confirmed today that Serge Aurier and Sergio Reguilon won’t be travelling with the squad. Aurier has got a ‘little problem’ and the medical team didn’t want to risk him, while Reguilon is out with flu. The Spurs boss has confirmed that Ben Davies will play at left-back, while Matt Doherty is all set to retain his place. Eric Dier is likely to continue but Davinson Sanchez may come into the side in place of Toby Alderweireld.

Midfield: Harry Winks was poor against Antwerp and Mourinho may decide to go with Moussa Sissoko and Emile-Pierre Hojbjerg in midfield. Erik Lamela has been carrying an issue in recent weeks so the club has taken the decision to rest him so that he can recover fully. Giovani Lo Celso needs to build up his match fitness and he should come in for Tanguy Ndombele.

Forward: Gareth Bale should be full of confidence after he scored the winner against Brighton and he will be pushing for a start on Thursday. Steven Bergwijn could be given another chance to impress, while Carlos Vinicius may get the nod, with Harry Kane given a rest along with Hueng-min Son.

Here is how we expect Tottenham to line up: 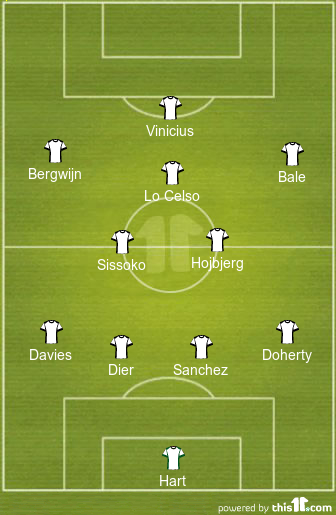