Arsenal continue their Europa League group stage campaign when they welcome Molde to the Emirates on Thursday night. Here is the team Gooner Mac expects Mikel Arteta to select:

Goalkeeper: Bernd Leno is set to be rested so Alex Runarsson should get the opportunity to make his second appearance for the club after keeping a clean sheet on his debut last week.

Defence: Arsenal are likely to make wholesale changes in defence with Gabriel due a well-earned rest following his outstanding performance against Manchester United on Sunday. Kieran Tierney is also likely to drop out while Rob Holding should be rested after rushing back from injury to start at Old Trafford.

Shkodran Mustafi is fit to return in defence while David Luiz has been declared available for selection after recovering from a thigh injury. The Brazilian could be recalled to start along with Sead Kolasinac.

Hector Bellerin is another key Arsenal player who should be given a breather with Cedric Soares coming in on the right while Bukayo Saka could be given a rest after starting the last few games.

Midfield: Thomas Partey showed Arsenal fans exactly what he’s capable of following a sensational performance against United and no doubt Arteta will want to protect him ahead of Sunday’s Premier League clash with Aston Villa.

Mohamed Elneny was also excellent on Sunday so he could make way with Granit Xhaka given a recall while Dani Ceballos is also pushing to start. Joe Willock impressed against Dundalk last week so he could be given another run-out tomorrow.

Attack: Pierre-Emerick Aubameyang will obviously be given a breather while Alexandre Lacazette may also drop to the bench with Eddie Nketiah recalled to lead the line up front for Arsenal.

Reiss Nelson did well against Dundalk so the 20-year-old will hope to get another chance to impress in attack and we should see Nicolas Pepe coming in with Willian dropping to the bench against Molde tomorrow. 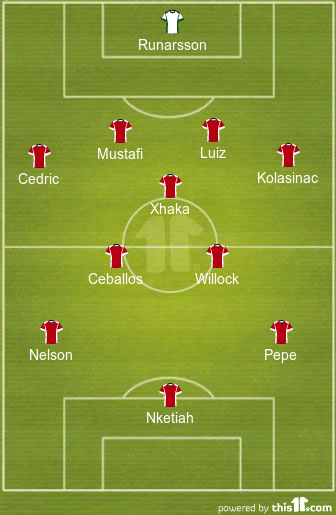