With two wins in a row in all competitions, Spurs now have the chance to leapfrog the likes of Southampton, Liverpool and Leicester to move clear at the top of the league with a win against Slaven Bilic’s side – who are yet to win a Premier League match this season.

Jose Mourinho has got plenty of quality and depth in his squad so the real challenge for him is to find the best combination. He is likely to make several changes again from the side that won in the Europa League in midweek, and this is the team we expect the Portuguese boss to select for the game:

Goalkeeper: Joe Hart did well against Ludogorets but Hugo Lloris is expected to be back between the sticks and take the captain’s armband as well.

Defence: It is highly unlikely that Mourinho will start with both Eric Dier and Toby Alderweireld in three matches in a row within a week, which means either of Joe Rodon or Davinson Sanchez could come into the side. Sergio Reguilon has recovered from flu and he is likely to take the left-back role, replacing Ben Davies.

Serge Aurier missed the last game with a minor injury and he could come into consideration if he is deemed fit enough. However, Mourinho doesn’t need to take risks, and Matt Doherty should retain his place at right-back.

Midfield: Both Tanguy Ndombele and Pierre-Emile Hojbjerg are expected to return to the starting line-up in the middle of the park in place of Harry Winks and Giovani Lo Celso. Moussa Sissoko should keep his place so the likes of Dele Alli will miss out.

Forward: Erik Lamela is out with an Achilles injury but Mourinho has plenty of options in the Tottenham attack. The Spurs coach was effusive about Gareth Bale following his latest performance on Tghursday night so the Welshman could keep his place on the right wing.

Harry Kane should once again lead the line up front while Son Heung-Min is set to replace Lucas Moura so Tottenham fans could finally see the trio of Kane, Bale and Son start a league game together. 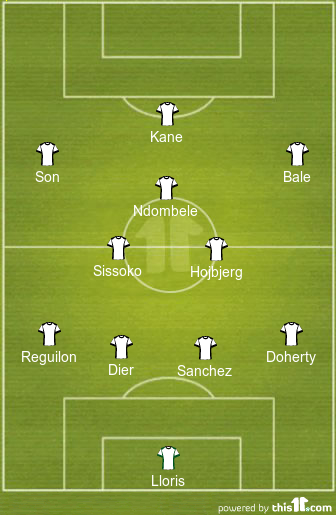