Chelsea take on Newcastle United at St James’ Park on Saturday lunchtime. Here is the team we expect Frank Lampard to select for the game:

Goalkeeper: Edouard Mendy is almost certain to start for Chelsea this weekend unless he picks up a late injury so Willy Caballero could keep his place on the bench ahead of Kepa.

Defence: Thiago Silva is expected to be rested following his exploits in South American during the international break having played 90 minutes for Brazil during each of their games against Uruguay and Venezuela.

Antonio Rudiger is the man most likely to be recalled to line-up alongside Kurt Zouma in the middle of the Chelsea defence while Reece James is expected to keep his place ahead of Cesar Azpilicueta at right-back.

Ben Chilwell will be given a late fitness check after he was forced off during England’s defeat to Belgium last weekend with a back issue but the defender is expected to be passed fit to start at left-back tomorrow.

Midfield: Lampard could make a change in midfield with Jorginho pushing for a recall after the Italian was left on the bench during Chelsea’s win over Sheffield United before the international break.

Mateo Kovacic could make way if Jorginho is recalled as N’Golo Kante should keep his place in the middle of the park. Billy Gilmour could push for a place on the bench after working on his fitness over the past two weeks.

Kai Havertz is back in contention after being given the all-clear to return after his positive covid-19 test before the break. The German should start in the attacking midfield position against Newcastle tomorrow afternoon.

Attack: With Havertz back, Mason Mount may be moved to the left side of the Chelsea attack with Christian Pulisic still missing so that could see Timo Werner playing through the middle at St James’ Park.

Tammy Abraham was on target against Sheffield United last time out but he may have to settle for a place on the bench tomorrow where he’ll be joined by Olivier Giroud.

Hakim Ziyech should keep his place on the right side of the Chelsea attack after making an impressive start to life in the Premier League so Callum Hudson-Odoi will be named among the substitutes once again. 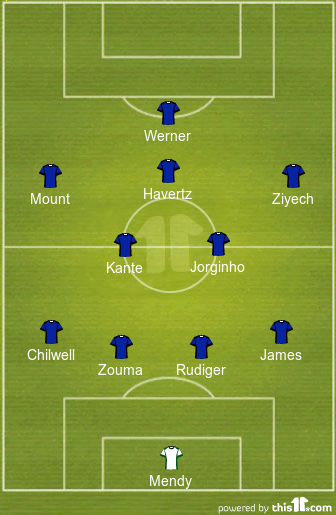