Tottenham will take on Arsenal at the New Tottenham Stadium on Sunday afternoon. This is the team we expect Jose Mourinho to select for the game:

Goalkeeper: The Telegraph claims that Hugo Lloris has emerged as a fitness doubt for the North London Derby but the Frenchman is still expected to be passed fit to return in goal with Joe Hart making way after conceding three times against LASK on Thursday.

Defence: Tottenham are set to be handed a major boost with Toby Alderweireld expected to return after training this week following a groin injury. The Belgian international is likely to line-up alongside Eric Dier in the middle of the Tottenham back four against Arsenal with Davinson Sanchez and Japhet Tangana making way.

Sergio Reguilon is a slightly doubt with a minor knock but the Spaniard should be fit to replace Ben Davies at left-back while Serge Aurier could come-in for Matt Doherty on the right side of defence.

Midfield: Moussa Sissoko should get a recall after being rested for Tottenham’s Europa League draw in LASK last night. The Frenchman should be joined by Pierre-Emile Hojbjerg in the middle of the park with Giovani Lo Celso dropping out.

Tanguy Ndombele is expected to keep his place against Arsenal so Harry Winks will have to settle for a place among the substitutes while Dele Alli will also have to make do with a place on the bench despite scoring last night.

Forward: Tottenham will check the fitness of Harry Kane after he wasn’t risked against LASK due to a minor knock but Mourinho says he’s confident his talisman will be fit to return up front against the Gunners.

Hueng-min Son will keep his place and the South Korean will be looking to find the net against Arsenal after scoring in the Europa League last time out but Lucas Moura will drop to the bench.

Gareth Bale was also on target from the spot against LASK but the Welshman could find himself among the subs against Arsenal with Steven Bergwijn recalled to join Kane and Son in the Tottenham attack. 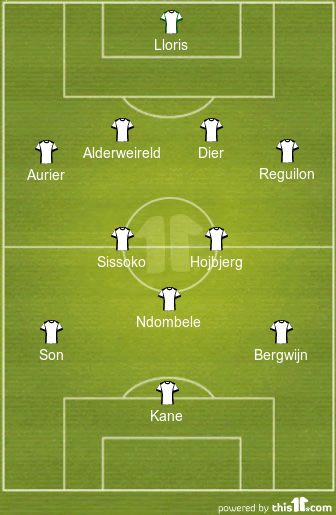