Arsenal are in Ireland to take on Dundalk in their final Europa League group game later this evening [5.55pm kick-off].

The Gunners have already wrapped up qualification to the knockout stages as Group B winners and maintained their 100 percent winning record by securing their fifth victory in a row with a 3-0 win at Molde last week.

However, while Arsenal are making light work of their Europa League campaign this season, they are struggling domestically as Sunday’s defeat to Tottenham in the North London Derby was their sixth defeat in 11 league games.

It’s left Arsenal sitting way down in 15th place in the Premier League table so Mikel Arteta will be forgiven for having one eye on Sunday’s clash with Burnley when he faces-off against Dundalk this evening.

Arteta will rest his big guns for the league game so the likes of Bernd Leno, Hector Bellerin, Kieran Tierney, Granit Xhaka and Pierre-Emerick Aubameyang aren’t likely to be involved.

Thomas Partey aggravated a thigh injury during the defeat to Tottenham at the weekend so he’s facing another spell on the sidelines which will be a huge blow to Arsenal ahead of a busy festive period.

Gabriel Martinelli stepped-up his return with a run out for the U23’s earlier this week but he’s not expected to be involved this evening while David Luiz may also not be risked due to a head injury. Sead Kolasinac and Reiss Nelson have also not travelled after picking up knocks in training in a late double blow to Arteta.

Calum Chambers could also make his first start of the season after returning to fitness while youngster Folrain Balogun is being tipped to make his full debut up front. 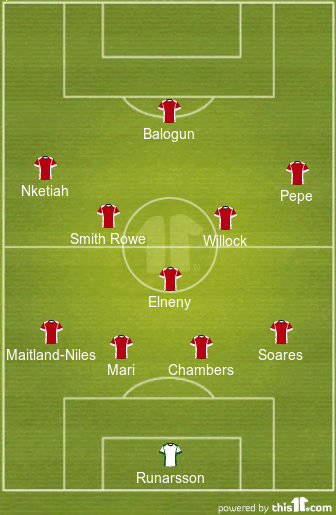 Dundalk 1-3 Arsenal: The hosts have lost all five of their group games so far and played in a domestic cup final at the weekend so they may still be feeling the effects of that gruelling game.

Arsenal have struggled badly in the Premier League but have impressed in Europe and I think they’ll be too strong for Dundalk despite fielding a severally weakened team. I predict an entertaining 3-1 away win this evening.