Arsenal are in desperate need of a win when they take on Southampton at the Emirates Stadium this evening [6pm kick off].

The Gunners have endured their worst league start for over 60 years and head into tonight’s action sitting way down in 15th place in the Premier League table having picked up just 13 points from their opening 12 games.

Sunday’s 1-0 defeat at home to Burnley has pilled the pressure on under-fire manager Mikel Arteta so the Spaniard knows anything other than victory this evening will put his position as Arsenal boss even further under the microscope.

However, three points won’t come easy as Southampton head to the Emirates in excellent form having enjoyed an impressive start to the 2020/21 campaign. Sunday’s 3-0 victory over Sheffield United has left the Saints sitting fourth in the table and just two points off the leaders so they should provide Arsenal with a stern test today.

Arsenal will continue to be without the services of Thomas Partey as the midfielder is still nursing a thigh injury while Granit Xhaka will start his three-match ban after being sent off against Burnley at the weekend.

Hector Bellerin is also unavailable due to suspension after collecting his fifth yellow card of the season while David Luiz remains a doubt with a head injury. Reiss Nelson and Sead Kolasinac are other absentees for Arsenal.

Gabriel Martinelli has stepped-up his recovery from a knee injury after turning out for the U23s but this game will come too soon for the Brazilian attacker. Nicolas Pepe is available again after serving his suspension.

Southampton have no fresh injury concerns to worry about but Nathan Redmond could be given a recall after scoring off the bench on Sunday. 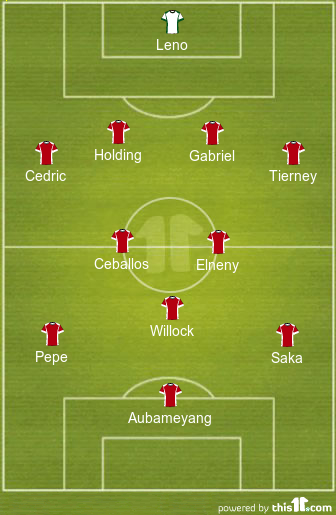 Arsenal 2-1 Southampton: Arsenal come into this match in dreadful form while Southampton are flying high in the table following a superb start so the visitors will be quietly confident of getting a positive result.

However, Arsenal have an excellent record against the Saints as they’re unbeaten in their last 25 home league games against Southampton and Arteta knows this is a must-win for him so I have a feeling the Gunners might edge it.

I expect a closely-fought encounter that could go either way depending on how Arsenal perform, but I’m backing them to secure a narrow 2-1 win.