Goalkeeper: Bernd Leno may have been able to do better to stop Theo Walcott’s goal during the draw with Southampton but he’s still certain to keep his place in-between the sticks tomorrow.

Defence: Arteta will be forced into at least one change in defence as Gabriel is suspended after being sent off against the Saints on Wednesday night. David Luiz made is return to action off the bench in that match after recovering from a head injury so he should replace his compatriot in the starting eleven.

I think we will see Arsenal deploy a back three away to Everton so Kieran Tierney will play in a more defensive role alongside Luiz and Rob Holding – who’s expected to keep his place ahead of Shkodran Mustafi.

Midfield: Bukayo Saka should continue on the left flank after an impressive run out against Southampton but it will be interesting to see who starts on the right side of the Arsenal midfield. Hector Bellerin is available again after serving a one-match ban but Ainsley Maitland-Niles put-in a solid display in midweek. However, I expect we’ll see Bellerin recalled against Everton as he’s been a key part of Arteta’s side.

Granit Xhaka will serve the second game of his three-match ban while Thomas Partey remains out with a thigh injury so Arteta doesn’t have too many options to rotate in the middle of the park. Therefore, I expect we’ll see Mohamed Elneny continue alongside Dani Ceballos.

Attack: Pierre-Emerick Aubameyang ended his goal drought with a superb finish against Southampton so no doubt the Gabon international will keep his place in the Arsenal attack this weekend. Eddie Nketiah got the assist with a lovely touch and worked hard in midweek but I wouldn’t be surprised to see Alexandre Lacazette recalled.

Willian is also pushing for a recall but he’s endured a disappointing start to life at Arsenal so it’s difficult to make a case for him starting. Nicolas Pepe could therefore keep his place on the right wing against Everton with Willian on the bench alongside Joe Willock. 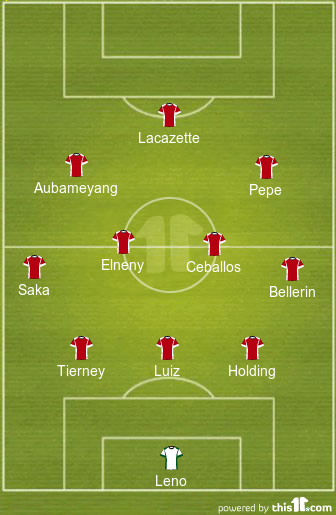