Football fans carefully analyse the skills and technique of each player as they all have their own individual ways of playing the game. Dribbling is a basic skill that can demonstrate the level of a football player but there are many more advanced technique’s that can set a player apart. The guys at Bongda365 have analysed some of the techniques we see from world class footballers.

This way of passing people is very popular, simple and very effective. With this skill Poke and Run is very basic; you just need to use the tip of the shoe to lightly kick the ball and then run past the opponent and receive the ball behind them.

With this movement, the technique is very simple, but it is important that you calculate the space behind the opponent before attempting it. Furthermore, you should pay attention to the distance between you and your opponent. You often fail with this skill when you stand too close to the opponent or you don’t have much space behind to receive the ball.

The aim of this technique is very simple. You want to trick your opponent into thinking you’re going in one direction, quickly change the direction of the ball with the drop of a shoulder to make them open their legs and pass the ball through the opponents legs before receiving the ball in the open space behind.

It sounds easy but in practice it can be very difficult to pull off as you have to have extremely quick feet. Not only that, you need to make sure there is enough space behind the opposition player to receive the ball and not get too close to the opponent or you’ll run into them.

This movement is very simple when you just use the underside of your shoes to touch the ball and make the ball roll as quickly as possible, then use your other leg to deceive the opponent, catch the ball or pass to the players on your team.

You can easily fail at this skill when you get too close to the opponent or you put the ball in the right direction that the opponent has guessed. That’s why you have to do this as quickly, decisively as possible. 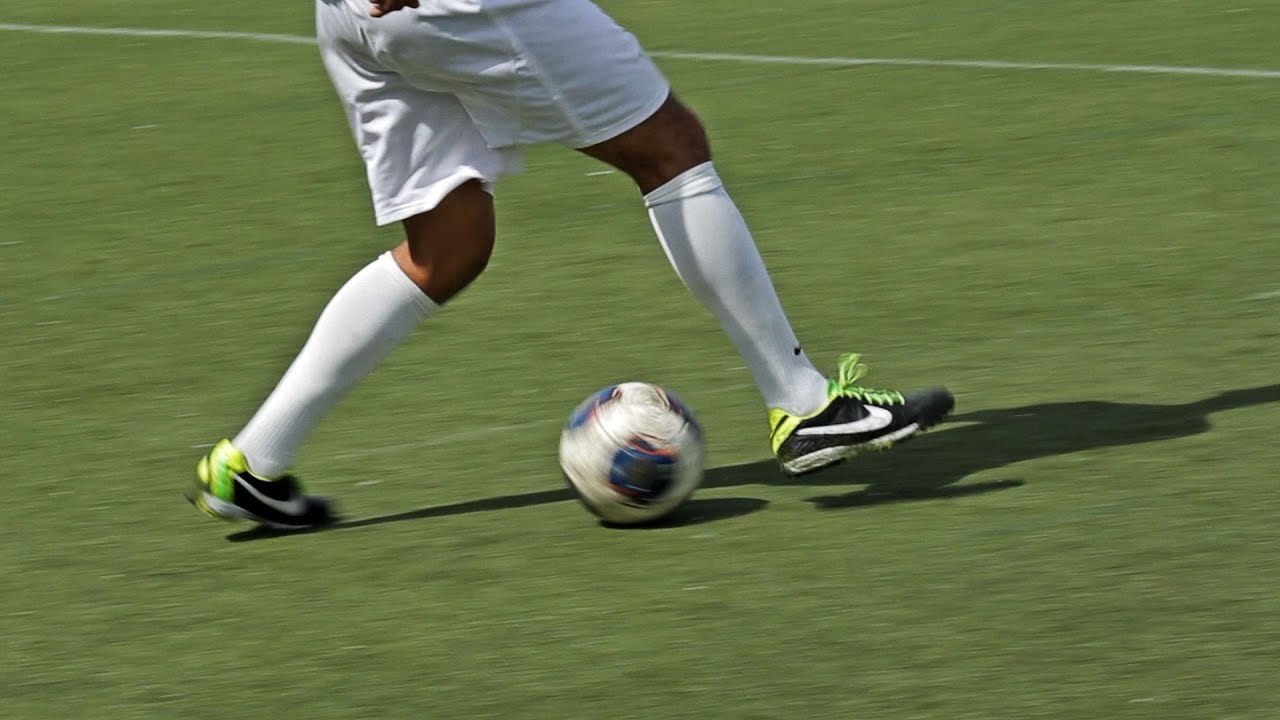 This is a very familiar movement that is popular with plenty of players and it is extremely effective. To do this skill effectively, you need to go through 2 steps. The first step is to use your dominant foot to kick the ball forwards and shrug your shoulders to distract your opponent. The second step, you step over the ball to confuse your opponent into thinking you’re going in a direction you don’t intend in going in.

When you are first starting out, it is often very easy to fail because you perform discrete, non-seamless movements. So as soon as you shrug your shoulders, you have to steer the ball immediately to surprise the opponent and go in the direction you assumed.

What you need to do is touch the ball twice quickly, the first with inner cheek, near the big toe to distract the defender into thinking you will cut the ball inside, then quickly transfer the ball to the outside of the foot, cut to the other side of the ball.

To do this technique well, you have to lower your shoulders when distracting the opponent, then you must change direction at a very fast speed.

Touch Stepover is very similar to the Stepover but in this skill you constantly touch the ball with your feet as you stepover while running towards the opponent. This added skill makes it more difficult to pull-off as you need to make slight touches of the ball, ideally with both feet, while also dropping your shoulders to distract the opponent.

The Elastico, also known as the Flip-Flap, was made famous by Ronaldinho and it’s a very high level skill that needs plenty of practice to master. Firstly, you need to push the ball to one side with the outside of your foot to make the opponent think that’s the direction you’re going in. But then in the same movement, and very quickly, stop the ball with the inside of the same foot by flicking it back in the opposite direction to deceive the opposition player.

This way of passing people in football is called: The snake. Basically, you have to try to keep the ball and legs seamless. Then the opponent will lose his balance and you just need to fall outside and speed up.

This is a very simple way of passing people in football, but it is still very effective. It is impossible to count how many times famous players have used it in football games. Basically, you move the ball to the right leg and act like you’re about to kick the ball and cut it to the opposite side.

One trick to really deceive an opponent is to raise your arm, let them think that it is really you about to kick the ball and then redirect it and quickly cut to the other side. Since raising your arm is what you do to keep your balance when taking a shot, you have to be really good at it in order to easily distract the opponent.

In addition to practicing passages in football, you should practice more swirling kicks so that when the opportunity arises you can launch a dangerous shot, making it difficult for the opponent’s goalkeeper. For more updates on other news behind the pitch and players’ lives, please visit Bongda356. Bongda356 also provides full information fixtures, results, standings of the Premier League, La Liga, Cup C1 and other regional tournaments.