Arsenal take on Newcastle United at the Emirates in the third round of the FA Cup this evening. Here is the team Gooner Mac expects Mikel Arteta to select:

Goalkeeper: Arteta could be tempted to give his No.1 a rest but this is going to be a tough test so I think we’ll see Bernd Leno starting in goal with Alex Runarsson on the bench.

Defence: Arsenal are set to welcome Gabriel back into the squad after he completed his isolation following a positive covid test so the Brazilian could return in the middle of defence. David Luiz is also pushing for a recall so Pablo Mari and Rob Holding could both be rested.

Hector Bellerin and Kieran Tierney are also expected to be given a breather so Cedric Soares could start at right-back with Ainsley Maitland-Niles coming-in at left-back after Sead Kolasinac joined Schalke on loan.

Midfield: Granit Xhaka is expected to be rested so Mohamed Elneny should be recalled. Thomas Partey is back in full training after recovering from a thigh injury so he could be back in the squad. However, Arteta may not want to risk him from the start and may save the midfielder for Thursday’s Premier League clash with Crystal Palace.

Therefore, Dani Ceballos may keep his place in midfield against Newcastle tonight. Emile Smith Rowe has impressed in recent weeks so he may be given a breather with Joe Willock recalled in the advanced central midfield role.

Attack: Arsenal should make plenty of changes in attack with Pierre-Emerick Aubameyang and Bukayo Saka rested while Alexandre Lacazette could also make way after scoring twice against West Brom last time out.

Willian is pushing for a recall while Nicolas Pepe could also come in to the Arsenal front three. Gabriel Martinelli is another option but he may be saved for the Palace game in midweek. Eddie Nketiah should be given a chance up front while Folarin Balogun will hope to feature at some point. 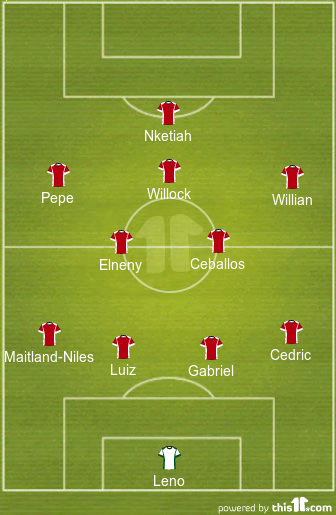