Arsenal take on Southampton at St Mary’s in the 4th round of the FA Cup on Saturday lunchtime. Here is the team Gooner Mac expects Mikel Arteta to select:

Goalkeeper: Mat Ryan joined Arsenal on loan from Brighton today and he was registered in time to be eligible to feature against Southampton. The 28-year-old will act as back-up for Bernd Leno during the second half of the season and is expected to be used in the cup competitions so he could make his debut tomorrow.

Defence: Arsenal are expected to make a number of changes with Gabriel among those pushing for recalls. Calum Chambers is also hoping to feature so they could replace David Luiz and Rob Holding in the middle of defence. Shkodran Mustafi is another option for Arteta but Pablo Mari remains out with a calf injury.

Kieran Tierney has been carrying a calf issue recently so he’s unlikely to be risked in the FA Cup. That could see Ainsley Maitland-Niles recalled at left-back with Cedric Soares given another chance to impress at right-back.

Midfield: Arteta is likely to rotate in midfield with Granit Xhaka rested while Thomas Partey should get a breather after making his first start in over a month during the 3-0 win over Newcastle on Monday night. Partey was superb in that game and needs to be protected so hopefully he doesn’t start against Southampton.

Dani Ceballos will face a late fitness test after missing the Newcastle game with a minor calf problem but he should be fit to return in midfield while Mohamed Elneny could also be recalled to start for Arsenal tomorrow.

Emile Smith Rowe was excellent last time out so he deserves a rest. Joe Willock is an option in the advanced midfield role but I think we might see Willian given a run out in a more central role this weekend.

Attack: Pierre-Emerick Aubameyang will hopefully be given a rest while Bukayo Saka also deserves a breather after playing plenty of football in recent weeks. Nicolas Pepe is expected to start in the Arsenal attack at St Mary’s while Gabriel Martinelli is also back in contention after recovering from a knock.

Alexandre Lacazette could keep his place up front but Eddie Nketiah is pushing for a recall and he might get the nod if Arteta wants to reserve Laca for the Premier League game against the Saints next Tuesday. 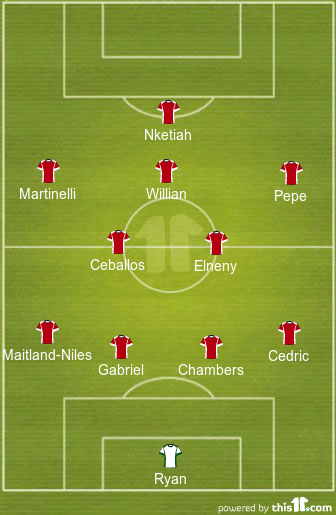