Liverpool take on Brighton at Anfield on Wednesday night. Here is the team we expect Jurgen Klopp to select for the game:

Goalkeeper: Alisson Becker is certain to keep his place between the sticks as he’s one of the first names on the team sheet. Caoimhin Kelleher will settle for a place on the bench.

Defence: Liverpool have been dealt a huge blow as Joel Matip has been ruled out for the rest of the season after suffering ankle ligament damage during the win at Tottenham last week so he joins Virgil van Dijk and Joe Gomez on the sidelines.

The Reds signed two new centre-backs on deadline day with Ben Davies and Ozan Kabak both arriving but neither player is expected to start tomorrow night while Fabinho is still nursing a knock.

Therefore, Liverpool skipper Jordan Henderson is expected to line-up alongside Nat Phillips in the middle of defence while Andy Robertson and Trent Alexander-Arnold should occupy the full-back positions once again.

Midfield: Naby Keita is expected to miss out once again due to a muscle injury while James Milner might drop out after picking up a thigh issue during the 3-1 win over West Ham on Sunday afternoon.

That could see Curtis Jones given a recall as he’s made some positive impressions off the bench recently. Gini Wijnaldum should continue in a deeper role for Liverpool with Thiago Alcantara also keeping his place in the starting eleven.

Forward: Roberto Firmino is expected to be recalled tomorrow after being named on the bench at the weekend while Mohamed Salah should keep his place after scoring a brace against the Hammers.

Sadio Mane missed the win at the London Stadium due to a minor knock but he could return to start against Brighton. With Liverpool’s best front three all starting, that would see Divock Origi and Xherdan Shaqiri dropping to the bench.

Takumi Minamino won’t be involved after securing a surprise loan move to Southampton on deadline day but Alex Oxlade-Chamberlain is available and should be among the subs. 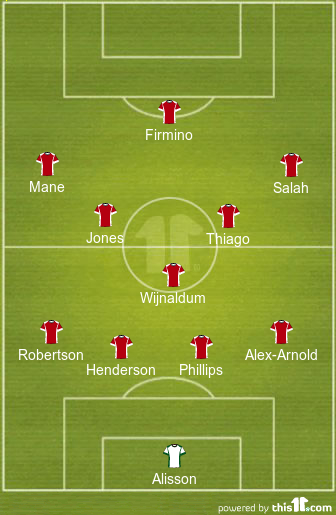