Liverpool take on Manchester City at Anfield on Sunday afternoon. Here is the team we expect Jurgen Klopp to select for the game:

Goalkeeper: Alisson Becker missed the defeat to Brighton in midweek due to illness but the Liverpool No.1 returned to full training on Friday and is expected to be recalled against City tomorrow so Caoimhin Kelleher will drop to the bench.

Defence: Liverpool were handed a major boost yesterday as Fabinho returned to the training pitch after recovering from a muscle issue. The Brazilian will be given a late test but should be fit to return in defence which will allow Jordan Henderson to move back into midfield.

Joel Matip, Virgil van Dijk and Joe Gomez remain on the sidelines through injury so it will be interesting to see who partners Fabinho in the middle of the back four. Nat Phillips has done alright in recent games but Klopp may be tempted to hand one of his January signings their debut.

Ben Davies arrived from Preston and was on the bench against Brighton but Ozan Kabak is available after receiving international clearance following his move from Schalke and he’s being tipped to make his Liverpool debut tomorrow. Andy Robertson and Trent Alexander-Arnold should continue in the full-back positions.

Midfield: Now that Liverpool have options in central defence, Henderson should return to his more familiar midfield role while Thiago Alcantara should keep his place in the middle of the park against Man City.

James Milner started against Brighton in midweek but I think we’ll see Klopp go with Gini Wijnaldum alongside Henderson and Thiago so the likes of Milner, Alex Oxlade-Chamberlain and Curtis Jones will have to settle for places on the bench.

Forward: Sadio Mane has missed Liverpool’s last two games with a knock but the Senegalese international was back in training on Friday and should be fit to return against City this weekend.

Roberto Firmino is expected to keep his place up front despite his goal-scoring problems this campaign while Mohamed Salah should continue in the Liverpool attack so Xherdan Shaqiri will be the man to make way. 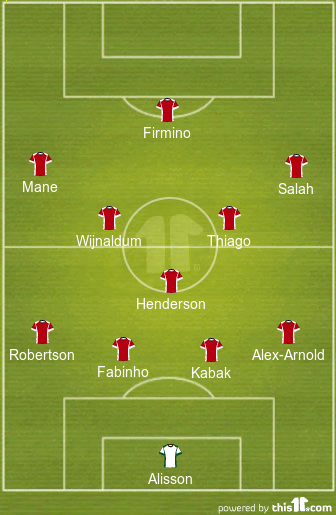