Liverpool take on Leicester City at the King Power Stadium on Saturday afternoon. Here is the team we expect Jurgen Klopp to select for the game:

Goalkeeper: Alisson Becker is expected to start once again between the sticks for Liverpool after making a successful return from illness so Caoimhin Kelleher will remain on the bench.

Defence: Liverpool have been handed yet another injury blow after it was confirmed today that Fabinho has been ruled out of the trip to Leicester with a muscle injury. The Brazilian joins Virgil van Dijk, Joe Gomez and Joel Matip on the sidelines.

Jordan Henderson is expected to start in the middle of the back four but it will be interesting to see who partners him. January signings Ben Davies and Ozan Kabak are both available and Klopp will no doubt be considering handing either of them their debuts tomorrow. However, it may still be a bit early so Nat Phillips could be handed a recall.

Andy Robertson and Trent Alexander-Arnold should continue in the full-back positions for Liverpool with Kostas Tsimikas on the bench.

Midfield: Gini Wijnaldum should keep his place in midfield and the Dutchman has been deployed in a deeper role lately with Thiago Alcantara playing more as a No.8 so that trend could continue at Leicester.

Curtis Jones started during the 4-1 defeat to Manchester City last time out but we might see Klopp mix things up tomorrow with Xherdan Shaqiri coming in. Alex Oxlade-Chamberlain and James Milner are other options but they may have to settle for places on the bench while Naby Keita remains on the sidelines.

Forward: Liverpool have a huge Champions League clash with RB Leipzig coming up next week so ideally Klopp would rest some of his big guns against Leicester. However, the defending champions trail leaders Man City by 10 points in the table, so Klopp can’t really afford to drop any points at the King Power.

That means we should see the Reds go with their favoured front three with Sadio Mane and Mohamed Salah once again supporting Roberto Firmino in attack. Diogo Jota is still 2-3 weeks away from returning from a knee injury but Divock Origi is likely to be named among the subs. 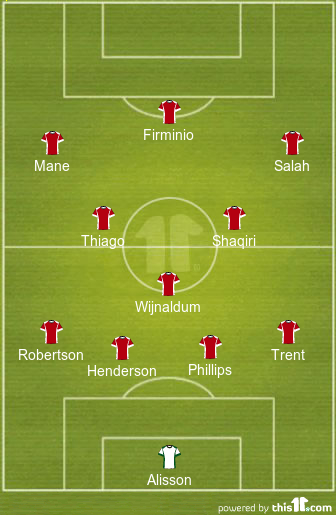