Manchester United take on Manchester City at the Etihad Stadium on Sunday afternoon. Here is the line-up we think Ole Gunnar Solskjaer will select for the game:

Goalkeeper: David De Gea will miss out once again as he’s travelled back to Spain for the birth of his first child so Dean Henderson will continue between the sticks this weekend.

Defence: Victor Lindelof didn’t feature during the 0-0 draw with Crystal Palace on Wednesday night due to an on-going back complaint but the Swedish international is expected to be fit to return against Man City. Eric Bailly is the man set to make way with Harry Maguire keeping his place in the middle of the Man Utd defence.

Alex Telles is pushing for a recall but Luke Shaw has been in excellent form this season so he’s expected to retain his place at left-back while Aaron Wan-Bissaka is certain to start at right-back once again.

Midfield: Manchester United will still be without the services of Paul Pogba as he’s still not ready to return from a thigh injury that’s kept him on the sidelines for the past month.

Scott McTominay is due to be recalled after being named on the bench for the draw with Palace in midweek. Fred should keep his place so Nemanja Matic is the player set to make way if McTominay is recalled.

Donny van de Beek remains a doubt having missed Manchester United’s last few games with a muscle issue but Bruno Fernandes is certain to keep his place in the attacking midfield role against City on Sunday.

Attack: Edinson Cavani made a successful return in midweek and he could keep his place up front as Anthony Martial is a doubt with a knee injury that kept him out of the Crystal Palace match.

Marcus Rashford should start once again for United and although Daniel James is pushing for a recall, Mason Greenwood could keep his place in attack. Juan Mata is ruled out through injury so he won’t travel to the Etihad Stadium. 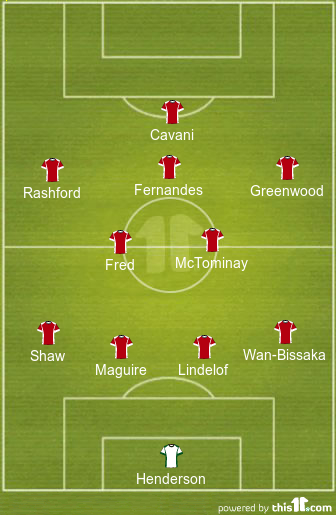