Manchester United take on West Ham at Old Trafford on Sunday evening. Here is the line-up we think Ole Gunnar Solskjaer will select for the game:

Manchester United take on West Ham at Old Trafford on Sunday evening. Here is the line-up we think Ole Gunnar Solskjaer will select for the game:

Goalkeeper: David De Gea is back in Manchester isolating after returning from Spain where he was tending to his new-born child. Solskjaer admitted at his press conference that he wasn’t sure whether De Gea was available yet so it looks like Dean Henderson will continue in goal despite his error for the AC Milan goal on Thursday night.

Defence: Victor Lindelof was rested for the Europa League game in midweek as Solskjaer continues to protect his niggling back problem so the Swedish international will be recalled to start alongside Harry Maguire with Eric Bailly he man to make way.

Luke Shaw was also given a rest against AC Milan so he’s set for a recall at left-back with Alex Telles dropping out while Aaron Wan-Bissaka will once again start at right-back against West Ham.

Midfield: Manchester United still have problems in midfield as Paul Pogba hasn’t recovered from a thigh injury that’s already kept him out for several weeks while Donny van de Beek is also ruled out once again.

Nemanja Matic started on Thursday night but Fred is set for a recall tomorrow after he was rested in midweek so Matic will drop out with Scott McTominay keeping his place in the middle of the park.

Bruno Fernandes will no doubt start once again in the attacking midfield position for Manchester United tomorrow but Juan Mata remains out with a muscle issue.

Attack: United are facing an injury crisis in attack as Anthony Martial is a major doubt after limping off against Milan with a groin issue. Marcus Rashford is also expected to miss the visit of West Ham after sitting out the Milan game with an ankle injury.

Edinson Cavani is another expected absentee as the South American hitman remains out with a knock that’s hampered him recently so Solskjaer has limited options in the final third.

Mason Greenwood is set to start up front with Daniel James on the wing while the 18-year-old Amad Diallo could be given his full debut after he made a huge impact off the bench against AC Milan having opened the scoring with a header. 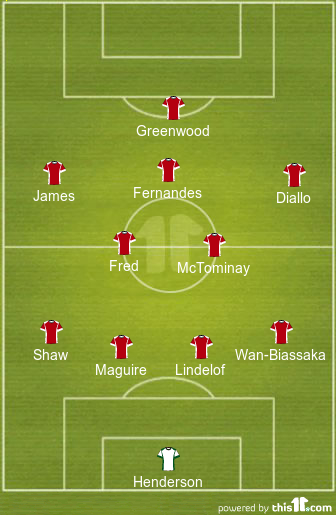