Man Utd take on Leicester in the FA Cup at the King Power on Sunday afternoon. Here is the line-up we think Ole Gunnar Solskjaer will select

Manchester United take on Leicester City in the FA Cup at the King Power on Sunday afternoon. Here is the line-up we think Ole Gunnar Solskjaer will select for the game:

Goalkeeper: David De Gea is back in contention but Dean Henderson has been United’s cup keeper this season and we expect him to retain the gloves tomorrow.

Defence: Eric Bailly missed the trip to AC Milan in midweek and it remains to be seen whether he’ll return this weekend so Victor Lindelof is set to continue alongside Harry Maguire in the middle of defence.

Aaron Wan-Bissaka will once again start at right-back but we could see a change on the other side of the back four with Alex Telles pushing for a recall. Luke Shaw has been in excellent form for Man Utd but he might get a rest against Leicester.

Midfield: Fred is likely to keep his place in midfield but Scott McTominay might drop out with Nemanja Matic recalled to the starting eleven tomorrow afternoon.

Donny van de Beek will be hoping to feature after returning to fitness but the Dutch international is expected to remain on the bench with Bruno Fernandes once again starting in the attacking midfield position for Man Utd.

Attack: Paul Pogba made an outstanding return to action in midweek as he came off the bench to score the winner against Milan. The Frenchman is tipped to start against Leicester and he might be deployed in a wide attacking role.

Edinson Cavani will need a late fitness test after missing the last few games with a muscle injury but he’s not going to be 100 percent fit so a place on the bench is the best he can realistically hope for.

Anthony Martial is also still a doubt after missing the Milan game with a groin injury and Marcus Rashford was forced off on Thursday night with a knock so he’s unlikely to be risked from the start at Leicester.

Daniel James should keep his place in the Manchester United attack while Mason Greenwood could start up front once again. Juan Mata remains on the sidelines but Amad Diallo will be an option from the bench. 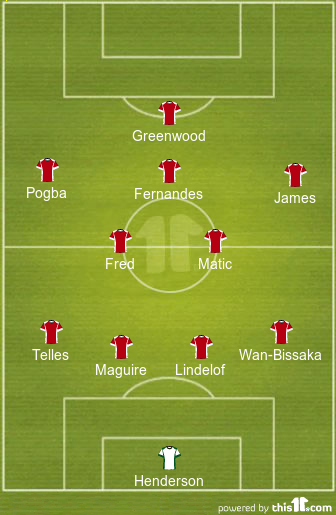