Liverpool take on Real Madrid at the Bernabeu in the Champions League quarter-finals tonight. Here is the team we expect Jurgen Klopp to select

Liverpool take on Real Madrid at the Bernabeu in the Champions League quarter-finals tonight. Here is the team we expect Jurgen Klopp to select for the game:

Goalkeeper: Alisson Becker will obviously continue between the sticks for Liverpool tonight so Adrian will be his back-up on the bench with Caoimhin Kelleher still out injured.

Defence: Nat Phillips continued his fine recent form with another impressive display against Arsenal at the weekend so he should keep his place alongside Ozan Kabak in the middle of defence. Virgil van Dijk, Joel Matip and Joe Gomez are all still out with long-term injuries so Rhys Williams should keep his place on the bench.

I don’t expect we’ll see any changes in the full-back positions as Andy Robertson will keep his place at left-back while Trent Alexander-Arnold will retain the right-back spot after returning to form at the weekend.

Midfield: Liverpool are still without Jordan Henderson for the trip to Madrid tonight following his groin surgery but Fabinho will start once again in the holding midfield department.

Some pundits suggest Klopp may opt for a 4-2-3-1 formation but I think he’ll stick with a three-man midfield to help counter the threat posed by the likes of Toni Kroos, Luka Modric and Casemiro.

Therefore, Gini Wijnaldum is expected to be recalled to start alongside Thiago Alcantara. The Dutchman was named on the bench against Arsenal but should start tonight with James Milner making way.

Forward: If Klopp does stick with a 4-3-3 formation then he has a big decision to make in attack. Diogo Jota must surely be recalled to start after coming off the bench to score twice against Arsenal on Saturday.

Mohamed Salah was also on target at the Emirates Stadium so he should keep his place on the right flank. Sadio Mane hasn’t been in top form lately but I still expect him to retain his place in the Liverpool eleven.

Therefore, Roberto Firmino is the man most likely to make way for Joto with the Brazilian dropping to the bench where he’ll be joined by the likes of Xherdan Shaqiri, Alex Oxlade-Chamberlain and Curtis Jones. 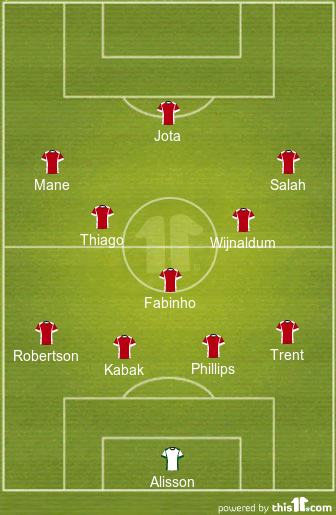