Tottenham travel to Goodison Park to take on Everton on Friday night. This is the team we expect Jose Mourinho to select for the game:

Tottenham travel to Goodison Park to take on Everton on Friday night. This is the team we expect Jose Mourinho to select for the game:

Goalkeeper: Hugo Lloris will once again keep goal for Tottenham tomorrow night so Joe Hart will remain on the bench.

Defence: We could see Mourinho make some changes in defence following the 3-1 defeat to Manchester United last weekend. Toby Alderweireld is pushing for a recall and he could come in for Eric Dier against Everton. Davinson Sanchez is also another option but Joe Rondon is likely to keep his place in the middle of the Tottenham back four.

Ben Davies remains out with a calf injury so Sergio Reguilon should start once again at left-back. Matt Doherty is also still on the sidelines with a muscle issue but Japhet Tanganga is available and he could come in for Serge Aurier at right-back tomorrow.

Midfield: Pierre-Emile Hojbjerg will once again start in midfield for Tottenham while Tanguy Ndombele should also keep his place against Everton.

However, Mourinho may want to freshen things up so Moussa Sissoko could come in to add some steel to the Spurs midfield. That means Giovani Lo Celso may drop to the bench where he’ll be joined by Dele Alli.

Forward: Harry Kane will once again lead the line up front for Tottenham against Everton while Hueng-min Son should keep his place in the front three after scoring against United last weekend.

But we could see Mourinho make one change with Lucas Moura making way after a frustrating outing against United. Erik Lamela is an option for Spurs but Gareth Bale could be the man given a recall to join Kane and Son in attack. 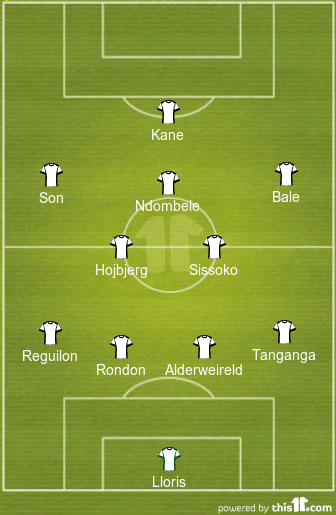