Manchester United take on Burnley at Old Trafford on Sunday afternoon. Here is the line-up we think Ole Gunnar Solskjaer will select for the game:

Manchester United take on Burnley at Old Trafford on Sunday afternoon. Here is the line-up we think Ole Gunnar Solskjaer will select for the game:

Defence: United will have two key defenders available for selection again on Sunday after Luke Shaw and Harry Maguire were suspended for the second leg against Granada in midweek.

Maguire is expected to come in alongside Victor Lindelof with Axel Tuanzebe dropping out while Shaw will replace Alex Telles at left-back. Aaron Wan-Bissaka should once again start at right-back and continue his long run of starts in the league.

Midfield: Manchester United will also welcome Scott McTominay back into the squad after he, too, was suspended in the Europa League quarter final so he’s set to return in midfield.

Fred should keep his place in the middle of the park so Nemanja Matic will make way while Bruno Fernandes will no doubt start once again in the attacking midfield role for Man Utd. That means Donny van De Beek will have to settle for a place on the bench yet again.

Attack: Marcus Rashford didn’t feature against Granada due to an on-going foot injury and Solskjaer says the attacker will need to be assessed ahead of the visit of Burnley. I don’t think Rashford will be risked from the start so a place on the bench is likely tomorrow.

Anthony Martial won’t play again this season due to a knee injury so Edinson Cavani is expected to lead the line up front for Manchester United tomorrow afternoon.

Paul Pogba could play in a wider attacking role while Daniel James is pushing for a recall. Mason Greenwood could be given a rest if Solskjaer hands James start. 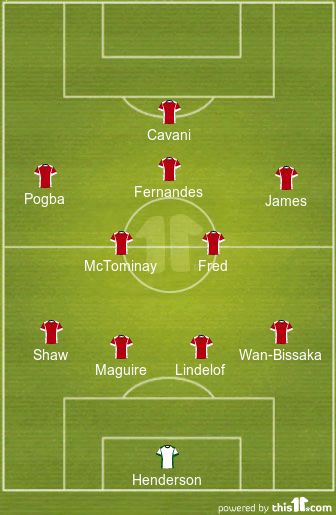