Chelsea take on fellow Champions League finalists Man City on Saturday evening. Here is the team we expect Thomas Tuchel to select for the game:

Chelsea take on fellow Champions League finalists Man City at the Etihad Stadium on Saturday evening. Here is the team we expect Thomas Tuchel to select for the game:

Goalkeeper: I don’t think we’ll see any changes in goal so Edouard Mendy should once again start between the sticks for Chelsea with Kepa Arrizabalaga on the bench.

Defence: The Blues could freshen things up in defence with Thiago Silva expected to be given a breather after the 36-year-old’s resolute performance against Real Madrid in midweek.

Kurt Zouma is pushing for a recall and he could line-up alongside Andreas Christensen in the back three. Antonio Rudiger played with a facial mask against Madrid and should retain his place this weekend.

Midfield: Chelsea will once again be without the services of Mateo Kovacic as the Croatian international is still recovering from a thigh injury that’s hampered him in recent weeks.

Therefore, Tuchel may once again go with N’Golo Kante alongside Jorginho in the middle of the park against Manchester City tomorrow.

I think we’ll see Chelsea make changes out wide with Ben Chilwell dropping out while Cesar Azpilicueta should also get a rest after his superb display against Madrid. Marcos Alonso could come in on the left flank with Reece James recalled on the right.

Attack: Tuchel has plenty of options in attack and we should see at least one change with Christian Pulisic coming back into the starting eleven after the 22-year-old was benched in midweek.

Timo Werner could be the man to make way despite getting on the scoresheet against Madrid. Mason Mount has become a key player for Chelsea this season so I expect him to start once again this weekend.

Hakim Ziyech, Olivier Giroud, Tammy Abraham and Callum Hudson-Odoi are pushing for a recalls but I think Kai Havertz will retain his place against Man City tomorrow evening. 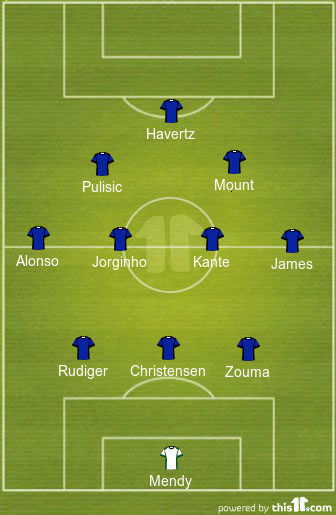