Manchester United take on Aston Villa at Villa Park on Sunday afternoon . Here is the line-up we think Ole Gunnar Solskjaer will select for the game:

Manchester United take on Aston Villa at Villa Park on Sunday afternoon . Here is the line-up we think Ole Gunnar Solskjaer will select for the game:

Goalkeeper: David De Gea kept goal during the 3-2 defeat to Roma on Thursday night but Dean Henderson is expected to be recalled as he’s now recoginised as United’s first choice in the Premier League.

Defence: Man Utd should make at least one change in defence with Victor Lindelof set for a recall after being rested for the Europa League semi-final second leg. Eric Bailly is the man most likely to make way with Lindelof starting alongside Harry Maguire.

Alex Telles is an option if Solskjaer wants to freshen things up at left-back but Luke Shaw has been in terrific form this season and should keep his place while Aaron Wan-Bissaka will no doubt start at right-back.

Midfield: Manchester United have a gruelling fixture list coming up as they play three games in just five days so Solskjaer is going to have to carefully manage his squad.

Scott McTominay was rested against Roma so he should be recalled on Sunday afternoon. Fred could keep his place so Donny van de Beek would be the man to make way.

Bruno Fernandes played another 84 minutes against Roma so he could be due a rest soon but Solskjaer appears reluctant to leave the Portuguese superstar out of his side under any circumstances.

Attack: Edinson Cavani was among the goals once again in Italy on Thursday night but he could be rested for the trip to Villa Park as the 34-year-old needs to be protected.

Marcus Rashford could therefore be recalled up front after he was named on the bench against Roma while Paul Pogba may get another run out on the wing where he’s impressed lately.

Daniel James and Anthony Martial remain out through injury while Mason Greenwood could be rested after completing ninety minutes last time out so Juan Mata could be given a rare Premier League start. 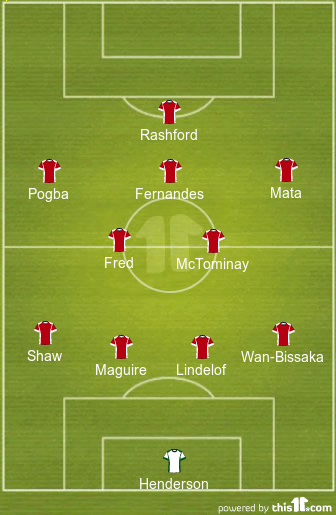