Liverpool take on Southampton at Anfield tonight. Here is the team we expect Jurgen Klopp to select for the game:

Liverpool take on Southampton at Anfield tonight. Here is the team we expect Jurgen Klopp to select for the game:

Goalkeeper: Alisson Becker is certain to keep his place in goal once again so Adrian is likely to remain on the bench tonight.

Defence: Liverpool have been boosted by the news that Nat Phillips is fit to return as the 24-year-old has recovered from his injury and should start in defence.

With Virgil van Dijk, Joel Matip and Joe Gomez all still working their way back to full fitness, Phillips will line-up alongside Ozan Kabak in the middle of the back four.

The Reds are unlikely to make any changes to their first choice full-backs so Trent Alexander-Arnold and Andy Robertson are set to start once again this evening.

Midfield: Liverpool skipper Jordan Henderson is close to returning after stepping up his recovery from a groin injury but this game will come too soon so he remains on the sidelines.

With Phillips back in defence, it frees-up Fabinho to move into midfield where is should be joined by Gini Wijnaldum with the Dutchman keeping his place once again.

If Klopp opts to deploy a 4-3-3 formation then Thiago Alcantara should start alongside Fabinho and Wijnaldum meaning the likes of Alex Oxlade-Chamberlain, James Milner, Curtis Jones and Naby Keita will have to settle for places on the bench.

Forward: Liverpool missed a number of chances against Newcastle last time out so Klopp will be hoping for a more clinical display from his forwards tonight.

The big decision for Klopp is who he leaves out from his main four attackers. Diogo Joto may have to settle for a place on the bench with Roberto Firmino keeping his spot up front.

Sadio Mane has been in disappointing form lately so he’ll be hoping to put-in a more positive display against his former club while Mohamed Salah should start once again. 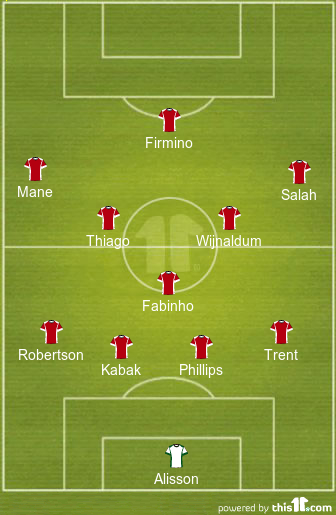