Liverpool take on Manchester United at Old Trafford on Thursday night. Here is the team we expect Jurgen Klopp to select for the game:

Liverpool take on Manchester United at Old Trafford on Thursday night. Here is the team we expect Jurgen Klopp to select for the game:

Goalkeeper: We don’t foresee any change in goal as Alisson Becker is certain to keep his place again so Adrian is likely to remain on the bench.

Defence: Liverpool continue to have huge injury problems in defence with Ozan Kabak the latest central defender to be ruled out after he missed the win over Southampton with a muscle problem.

Nat Phillips came through the ninety minutes on Saturday unscathed after recovering from a knock so he should keep his place against Man Utd but Virgil van Dijk, Joel Matip and Joe Gomez all remain on the sidelines.

Fabinho could drop back into defence but he’s expressed his preference to play in midfield so Klopp may give Rhys Williams another start after the 20-year-old helped Liverpool keep a clean sheet against Southampon.

The Reds are highly unlikely to make any changes to their full-backs so Trent Alexander-Arnold and Andy Robertson will start once again at Old Trafford tomorrow night.

Midfield: Liverpool skipper Jordan Henderson has been ruled out for the rest of the season as he continues to recover from a groin injury so he won’t be available to face Manchester United.

As stated previously, Fabinho is likely to continue in midfield while Gini Wijnaldum should once again line-up in the middle of the park for Liverpool tomorrow night.

Curtis Jones is pushing for a recall but he may have to settle for a place on the bench once again as Thiago Alcantara is expected to keep his place against United. James Milner and Naby Keita are both set to miss out after failing to recover from knocks that kept them out of the win over Southampton.

Forward: Sadio Mane was back among the goals at the weekend so he’ll hope to have done enough to retain his place in the Liverpool attack despite an inconsistent campaign.

Mohamed Salah is also likely to start against Man Utd so Diogo Jota could be the man to make way with Roberto Firmino recalled up front for the Merseysiders. 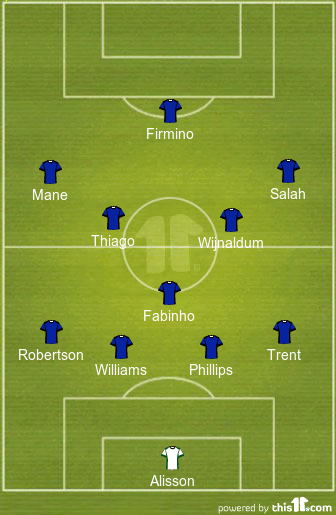