Chelsea take on Leicester City in the FA Cup final at Wembley on Saturday evening. Here is the team we expect Thomas Tuchel to select for the game:

Chelsea take on Leicester City in the FA Cup final at Wembley on Saturday evening. Here is the team we expect Thomas Tuchel to select for the game:

Goalkeeper: Kepa Arrizabalaga kept goal against Arsenal last time out and has been Chelsea’s regular goalkeeper in the FA Cup so he’s expected to keep his place ahead of Edouard Mendy.

Defence: Chelsea have been handed a big injury boost as Andreas Christensen has been declared fit and available for selection by Tuchel so he’s expected to be recalled in the back three.

Thiago Silva should keep his place while Antonio Rudiger will be recalled after being rested for the defeat to Arsenal on Wednesday night. Kurt Zouma will therefore drop to the bench tomorrow.

Midfield: Cesar Azpilicueta played in the back three in midweek but he could be moved to the right flank against Leicester with Reece James making way.

Chelsea have been handed another major boost as Mateo Kovacic has been passed fit to return after recovering from a thigh injury. He’s been a huge miss for the Blues during his absence so he’s likely to be recalled for the FA Cup final.

N’Golo Kante is also available after shaking off a calf issue so he could partner Kovacic in midfield with Billy Gilmour dropping out. Jorginho could also drop to the bench after his error against the Gunners.

Ben Chilwell started against Arsenal last time out and although Marcos Alonso is pushing for a recall, we expect Chilwell to retain his place on the left flank tomorrow evening.

Attack: Chelsea have plenty of options in attack and Tuchel is expected to freshen things up against Leicester with Timo Werner pushing for a recall up front. Kai Havertz may make way and join Olivier Giroud and Tammy Abraham on the bench.

Hakim Ziyech has featured heavily in the FA Cup and scored during the semi-final win over Man City so he could be recalled for the final with Christian Pulisic making way.

Callum Hudson-Odoi is another option for Tuchel but he may have to settle for a place among the subs along with Havertz and Pulisic as Mason Mount is likely to keep his place in the Chelsea attack. 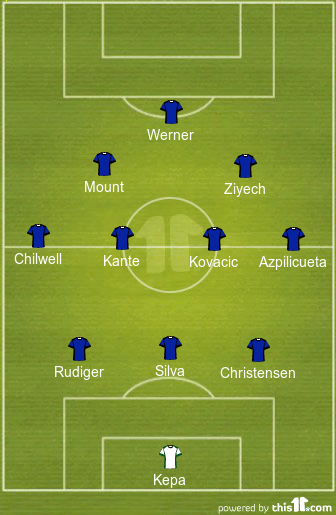