Chelsea take on Leicester City in a crucial Premier League game at Stamford Bridge on Tuesday night. Here is the team we expect Thomas Tuchel to select

Chelsea take on Leicester City in a crucial Premier League game at Stamford Bridge on Tuesday night. Here is the team we expect Thomas Tuchel to select for the game:

Goalkeeper: Kepa Arrizabalaga kept goal during Chelsea’s defeat to Leicester in Saturday’s FA Cup final but he’s expected to drop out with Edouard Mendy recalled between the sticks tomorrow night.

Defence: Andreas Christensen is back in contention after recovering from injury but it remains to be seen whether he’s deemed fit enough to start just yet so he may have to settle for a place among the substitutes.

Reece James was deployed on the right side of the Chelsea back three at the weekend and he did well to negate the threat of Jamie Vardy so Tuchel may adopt a similar strategy on Tuesday night.

Thiago Silva could be given a rest as it’s a big ask for the 36-year-old to play in two high intensity games so close together so Kurt Zouma may be recalled to start alongside Antonio Rudiger.

Midfield: If James plays in defence then Cesar Azpilicueta may keep his place on the right flank but we should see a change on the left wing with Ben Chilwell coming in for Marcos Alonso.

Chelsea should welcome Mateo Kovacic back into the squad after he recovered from a thigh injury and the Croatian international could be given a chance to get some much-needed minutes under his belt tomorrow in order to get him up to speed ahead of the Champions League final.

Kovacic was a key player under Tuchel before his injury so his absence has been sorely felt. Jorginho could be the man to drop out if Kovacic does start with N’Golo Kante keeping his place.

Attack: Chelsea have plenty of attacking options and Tuchel is expected to freshen things up after Saturday’s disappointment with Kai Havertz set for a recall up front. Timo Werner could be the man to make way.

Christian Pulisic is also expected to be recalled into the front three after being named on the bench at Wembley. Hakim Ziyech is likely to drop out with Mason Mount keeping his place in attack. 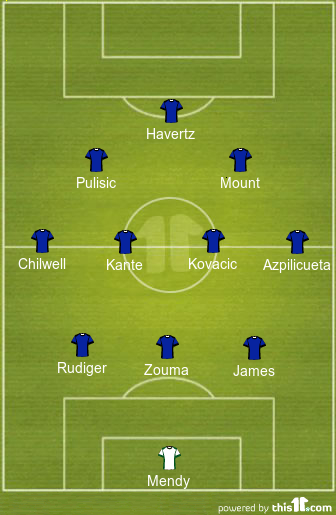