Manchester United take on Villarreal in the Europa League final this evening. Here is the line-up we think Ole Gunnar Solskjaer will select for the game:

Manchester United take on Villarreal in the Europa League final this evening. Here is the line-up we think Ole Gunnar Solskjaer will select for the game:

Goalkeeper: David De Gea has been United’s goalkeeper during the latter stages of the Europa League and he’s expected to start the final with Dean Henderson dropping to the bench.

Defence: Man Utd look set to be without Harry Maguire this evening as the centre-back is struggling to overcome an ankle injury. Maguire failed to take part in training on Tuesday so it looks like he’s failed in his attempts to prove his fitness.

Maguire’s absence will leave a huge hole to be filled in defence. Eric Bailly and Axel Tuanzebe are vying for one position as Victor Lindelof is expected to be recalled after being rested at the weekend. Tuanzebe is being tipped to edge out Bailly so the youngster could partner Lindelof this evening.

Solskjaer will recall Aaron Wan-Bissaka at right-back after he was rested for Manchester United’s win at Wolves while Luke Shaw will also come back into the side with Brandon Williams and Alex Telles making way.

Midfield: There will be changes in midfield too as Fred and Scott McTominay have been passed fit to return after recovering from minor knocks that they picked up against Fulham last week. Nemanja Matic and Donny van de Beek will drop out after starting at Wolves on the final day of the Premier League season.

Juan Mata scored on a rare league start at the weekend but the Spaniard is still set to drop to the bench as Bruno Fernandes will be recalled in the attacking midfield role for Man Utd this evening.

Attack: Anthony Martial has failed to make the trip to Poland as the French international is still overcoming a knee injury that’s kept him on the sidelines since late March.

Edinson Cavani will be recalled to lead the line up front for Man Utd while Paul Pogba is expected to be deployed in a wide attacking role as he’s impressed in that position in recent weeks.

The big decision for Solskjaer is who fills the final attacking role with Marcus Rashford and Mason Greenwood battling it out. Greenwood has been in terrific form lately but Rashford is being tipped to get the nod tonight. 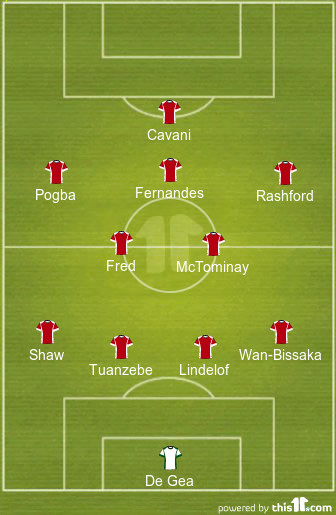