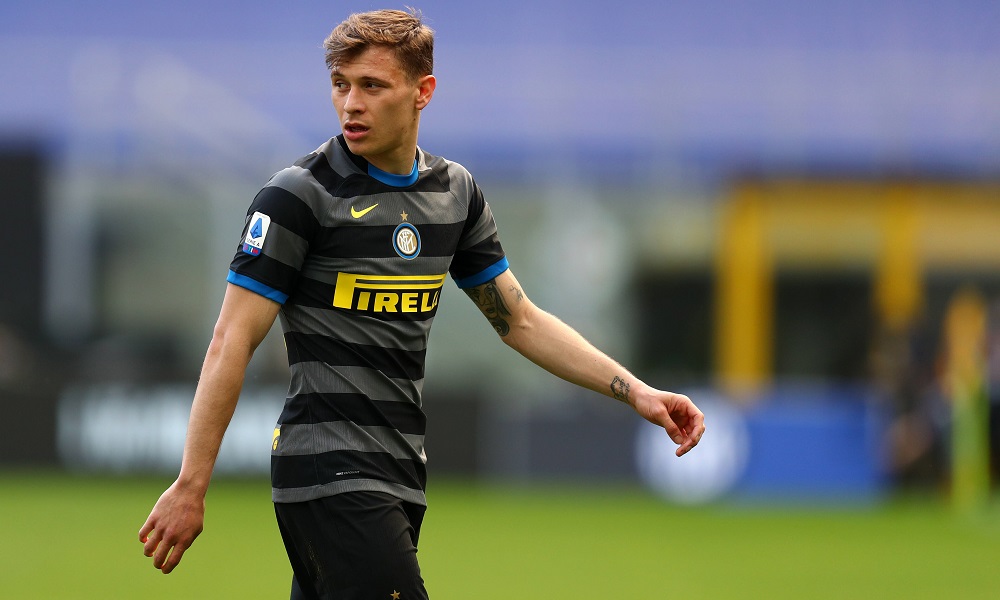 Manchester United and Liverpool are ready to submit £59.5m offers for Nicolo Barella as Inter Milan contemplate cashing-in on the midfielder this summer, according to TuttoMercatoWeb.

Barella has developed into one of the best all-round midfielders in Serie A since joining Inter from Cagliari in 2019 and his excellent form for his club helped them land the league title last season ahead of rivals AC Milan.

The 24-year-old also earned a place in Roberto Mancini’s Italy squad for Euro 2020 and he played a starring role as the Azzurri went all the way to lift the trophy after beating England in a dramatic penalty shoot-out at Wembley.

It appears Barella’s performances have caught the eye of clubs here in the Premier League as earlier today TeamTalk cited a report from the print version of La Repubblica that claimed Liverpool are ready to table a £59.5m [€70m] offer.

The Italian publication suggests that Inter had slapped a £59.5m [€70m] price tag on Barella’s head to try and scare off potential suitors but it hasn’t deterred Liverpool as they’re prepared to meet that valuation.

Furthermore, La Repubblica, via TeamTalk, suggests that Inter Milan chiefs are contemplating cashing-in on the midfielder as they still need to raise money despite the sale of Achraf Hakimi to Paris Saint-Germain.

Jurgen Klopp is in the market for a central midfielder to replace Gini Wijnaldum after he joined Paris Saint-Germain on a free transfer this summer and it appears the Liverpool boss is targetting Barella as the man to fill his boots.

However, the Merseysiders will face stiff competition as TuttoMercatoWeb says Manchester United are ready to follow Liverpool by submitting a £59.5m [€70m] offer of their own for the Italian international.

Ole Gunnar Solskjaer is on the verge of splashing out on Jadon Sancho but the United boss is also expected to sign a centre-back while another midfielder is also reportedly on the agenda this summer.

Nemanja Matic turns 33 next month so he’s approaching the end of his career while Paul Pogba’s future remains uncertain as he’s in the final year of his contract at Old Trafford and is no closer to signing an extension.

It appears Man Utd have identified Barella as a possible signing to strengthen their ranks in the middle of the park and the Red Devils are ready to battle-it-out with Liverpool over a proposed £59.5m deal.