Over 50 players at this summers European Championships had African roots. Here we look at some of the most well known players and name our best eleven.

National teams of 24 European countries competed in the 16th edition of the UEFA European Championships this summer. The tournament was established 61 years ago, to determine which of Europe’s top footballing nations is actually the best.

Although the Euros are all about European football, players with African heritage have been involved in the tournament. In fact, at Euro 2020, more than 8% of all the 622 players had African roots. That’s more than 50 players!

What’s even more interesting is that of those 50+ players, quite a few are global superstars. And many of them were brilliant at the tournament.

Ahead of the start of the tournament, France were the #1 favourite, with odds in the ballpark of 5/1. Things changed as the tournament progressed, so if you’d like to check updated odds, it’s best to visit the website of Sportingbet or some other reputable sportsbook.

France were tagged as pre-tournament favourites as they’ve been the most dominant national team on the planet over the last few years. Five years ago, they finished as runners-up at Euro 2020, after losing to Portugal in the final. Fast-forward to 2018, and they’ve finally grabbed a trophy, an even bigger one – the 2018 World Cup!

The fact that France have been such a successful team should come as no surprise to anyone who’s taken a look at their squad. It’s packed with superstars, many of whom can trace back their roots to Africa.

Some of France’s key men, including Paul Pogba, N’Golo Kante, and Kylian Mbappe are of African origin. Pogba’s parents are originally from Guinea, which is the country Paul’s two brothers play for. France’s midfield engine Kante is a son of Malian parents, who migrated to Paris in the 1980s. Mbappe’s dad is originally from Cameroon, while his mother is of Algerian origin.

There are 13 other members of the France national team that have some links with Africa, including Marcus Thuram, Kingsley Coman, and Karim Benzema.

Other Title Contenders Also Rely On Players With African Roots

Belgium’s goal-scoring machine Romelu Lukaku was born in Belgium to Congolese parents. In fact, his father Roger Lukaku represented the national team of Congo (then known as Zaire) back in the 1990s. The mom of his teammate Youri Tielemans is from the same country.

Over in the Portugal squad, Nelson Semedo, Renato Sanchez, and a few others can trace their roots to Cape Verde. Further, Portugal’s 6’2 ball-winning midfielder William Carvalho was born in Angola.

It’s a similar case when the Dutch national team is concerned, where several players have at least one African parent. Memphis Depay’s father, for example, is from Ghana.

Pretty much the same goes for the players playing for England, Germany, and many others.

Only A Couple Of Nigeria-Origin Players Got To Euro 2020

Guinea, Mali, Cameroon, Cape Verde, Angola, Congo, Ghana – there are at least a couple of Euro 2020 players with roots tracing to those African countries.

What is surprising is that Nigeria isn’t on that list. The most populous African country is famous for the amount of footballing talent that emerged there before achieving glory on the global stage.

However, as it turns out, most of them want to play for their national team. Rather than choosing to represent the country where they reside, many Nigerian football players have decided to represent their country of origin.

Of course, there are also some examples of players who did just the opposite. Probably the best example is David Alaba, who’s playing for Austria. The new Real Madrid man was instrumental for Austria in their effort to get to Round of 16, where they got defeated by Italy in extra time. 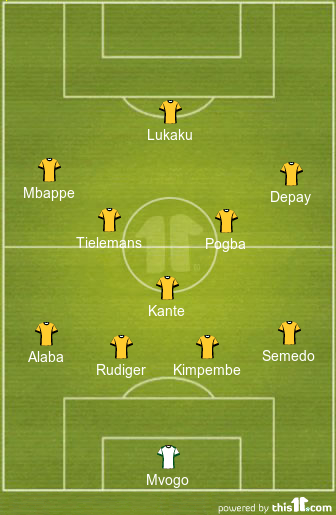 David Alaba’s performances for Austria in June would make him a key player in a Euro 2020 team made up of players with African heritage. He’d probably have to take the left-back position rather than being in the centre of the defensive line.

It’s not because that position seems to suit him the best, but also because Germany’s Rudiger and France’s Kimpembe would fit those slots. Then, on the right, Portugal’s Nelson Semedo would have the right-back’s role.

The four would be in front of Yvon Mvogo, who has moved up the ranks in the Swiss national team, eventually getting a chance to be their first-choice goalie.

In the midfield, it would have to be two Frenchmen with African roots – N’Golo Kante and Paul Pogba. The third slot would probably go to Belgium’s Youri Tielemans.

Up in the front, we’d probably see Kylian Mbappe on one flank and Memphis Depay on the other. Finally, the man closest to the opposition goal would have to be Romelu Lukaku.