Man Utd take on West Ham at Old Trafford in the third round of the Carabao Cup on Wednesday. Here is the line-up we think Ole Gunnar Solskjaer will select

Manchester United take on West Ham at Old Trafford in the third round of the Carabao Cup on Wednesday night. Here is the line-up we think Ole Gunnar Solskjaer will select for the game:

Goalkeeper: David De Gea is expected to be rested so there will be a change in goal. Dean Henderson has been building up his match fitness with a couple of appearances for the U23’s lately so he could be brought back into the first team tomorrow.

Defence: Man Utd are set to rest their key defenders with Raphael Varane, Aaron Wan-Bissaka, Luke Shaw and Harry Maguire all given a breather ahead of the Premier League clash with Aston Villa at the weekend.

Diogo Dalot should get a run out at right-back while Victor Lindelof could be partnered by Eric Bailly in the middle of the back four. Alex Telles is back in contention and Solskjaer has confirmed he’ll be in the squad so the Brazilian could return at left-back after recovering from injury.

Midfield: We should see changes in the Manchester United midfield against West Ham with Fred and Scott McTominay rested having both started during the 2-1 league win at the Olympic Stadium on Sunday.

Donny van de Beek is expected to get another chance to impress as he looks to kick-start his United career while Nemanja Matic is likely to partner the Dutchman in the middle of the park tomorrow evening.

Attack: Paul Pogba is set to be rested along with Bruno Fernandes as Solskjaer protects his key men ahead of the Villa game. Cristiano Ronaldo is also highly unlikely to start in the League Cup so the Portuguese superstar should make way.

Mason Greenwood is another player who could get a rest so Jadon Sancho is expected to be recalled. The 21-year-old has endured a slow start to life at Old Trafford since arriving from Borussia Dortmund so he’ll be desperate to make an impact against West Ham tomorrow.

Jesse Lingard deserves a start after scoring off the bench in each of his last two appearances while Juan Mata could also get a rare start in the Manchester United line-up.

Marcus Rashford remains out with a shoulder injury while Edinson Cavani is unlikely to be fit enough to start due to a knock but Anthony Martial is available and the Frenchman is expected to start up front. 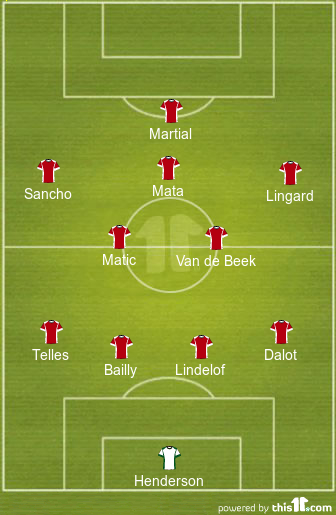