Granit Xhaka has been pictured wearing a knee brace with Arsenal confirming the midfielder is facing three months on the sidelines.

Granit Xhaka has been pictured wearing a knee brace with Arsenal confirming the midfielder is facing three months on the sidelines.

Xhaka only returned to Arsenal’s starting line-up last weekend after serving a three-match suspension following his dismissal during the 5-0 defeat to champions Manchester City at the Etihad Stadium in late August.

The 29-year-old had missed Premier League games against Norwich and Burnley as well as Arsenal’s Carabao Cup victory over AFC Wimbledon before being recalled to line-up alongside Thomas Partey against Tottenham on Sunday afternoon.

However, Xhaka needed treatment after being clattered by Lucas Moura during the latter stages of the second half. The Swiss international was eventually replaced by Albert Sambi Lokonga in the 82nd minute as Arsenal went on to win the North London Derby.

Speaking after the 3-1 victory, Gunners boss Mikel Arteta admitted the injury looked serious and Xhaka’s wife has uploaded a photo to social media showing him wearing a knee brace as he played with their daughter.

The snap sparked fears the midfielder was facing an extended spell on the sidelines and the club issued an update on Arsenal.com today confirming Xhaka has suffered serious damage to his medial knee ligament. 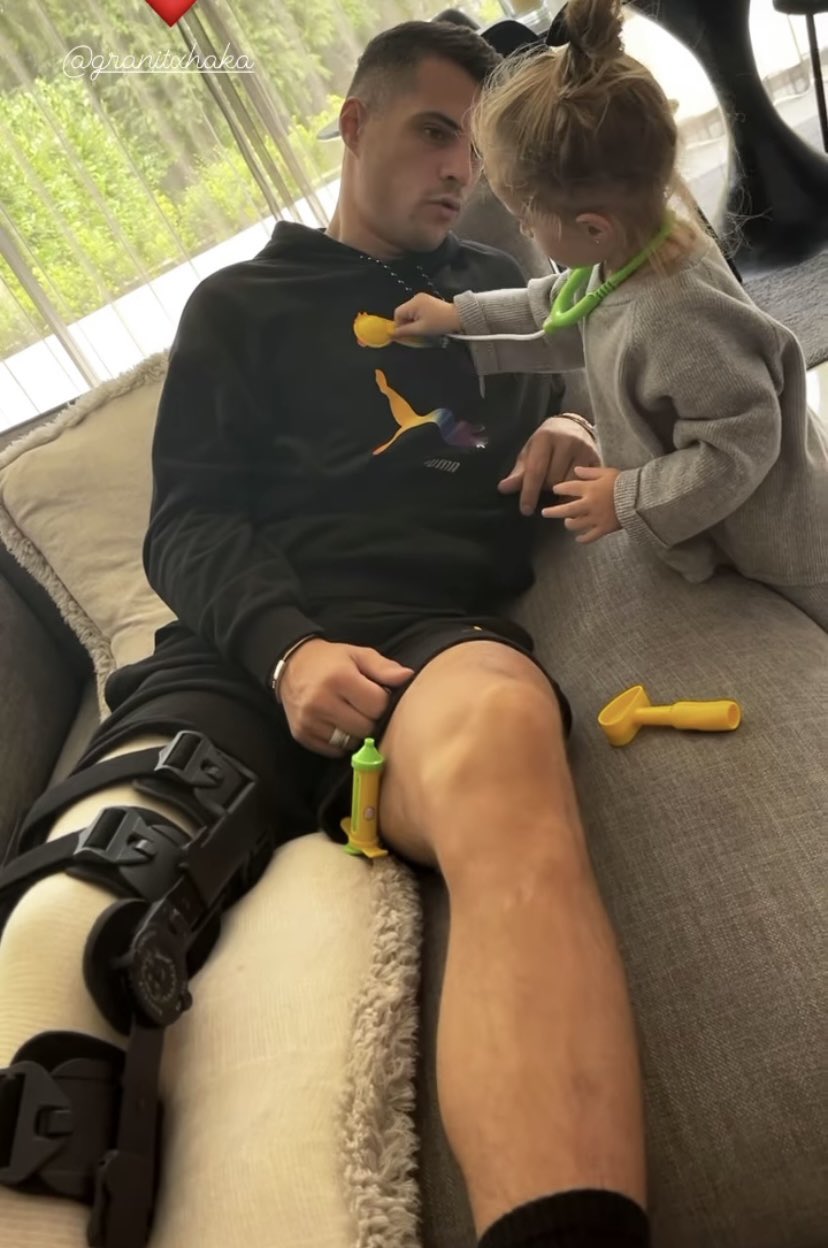 The good news is the midfielder doesn’t require surgery but Arsenal still expect his rehabilitation to take around three months meaning Xhaka is unlikely to play again until the early stages of 2022.

A statement on Arsenal.com confirmed:

Further to injuring his right knee during Sunday’s match against Tottenham Hotspur, assessments and scans have confirmed that Granit Xhaka suffered a significant injury to his medial knee ligament.

A specialist consultation took place in London on Tuesday evening which has determined that Granit does not require surgery.

Granit’s recovery and rehabilitation programme will start immediately and we are aiming for him to be back in action in approximately three months.

The news will be a big blow to Arsenal as Xhaka has been a key player under Arteta and his absence will be sorely felt over the coming months. The former skipper is now set to miss around 15 Premier League games and Arsenal will be praying he returns in early January as Partey will be heading to the AFCON with Ghana that month.

Arteta must now decide how to replace Xhaka and Lokonga is favourite to come-in alongside Partey in the middle of the park with the Belgian youngster seemingly ahead of Mohamed Elneny and Ainsley Maitland-Niles in the pecking order.