Liverpool get back to Champions League action when they take on Atletico Madrid at Anfield on Wednesday. Here is the team we expect Jurgen Klopp to select

Liverpool get back to Champions League action when they take on Atletico Madrid at Anfield on Wednesday night. Here is the team we expect Jurgen Klopp to select for the game:

Goalkeeper: Alisson Becker will no doubt continue between the sticks so Adrian and Caoimhín Kelleher will battle for a place among the substitutes.

Defence: Klopp may opt to make a change to the back four that started during Liverpool’s frustrating 2-2 draw with Brighton & Hove Albion at the weekend with Joel Matip coming in for Ibrahima Konate.

Virgil van Dijk will almost certainly keep his place at the heart of defence while Trent Alexander-Arnold should continue at right-back for the Reds. Andrew Robertson is also expected to keep his place on the left side of the defence.

Midfield: Liverpool have been handed a double injury boost with Fabinho and Thiago Alcantara back in contention. Fabinho has recovered from a knee injury while Thiago is back from a calf problem and the duo could be given immediate recalls against Atletico Madrid tomorrow.

Naby Keita has been ruled out after being forced off with a hamstring injury at the weekend while Curtis Jones may be given a breather so Fabinho and Thiago could join Jordan Henderson in the Liverpool midfield.

Alex Oxlade-Chamberlain may therefore have to settle for a place among the substitutes once again.

Forward: Liverpool are tipped to freshen things up in attack with Diogo Jota pushing for a recall. The Portuguese international could replace Roberto Firmino in attack with the Brazilian given a rest.

Mohamed Salah is expected to keep his place in the front three while Sadio Mane should also continue on the left flank after scoring against Brighton at the weekend.

Takumi Minamino and Divock Origi will be other options from the bench along with Firmino if Klopp needs to mix things up in the second half tomorrow night. 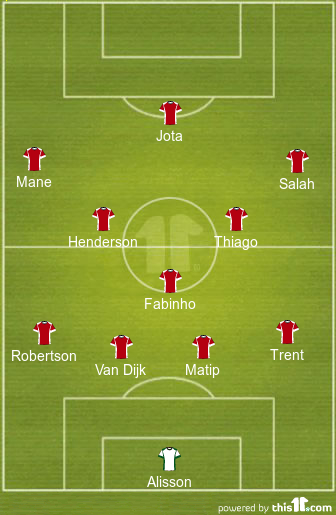