The Gunners returned to winning ways last weekend with a comfortable 2-0 triumph over Newcastle United at home. They are now just goal difference behind West Ham United for the final Champions League spot.

Mikel Arteta’s side will face Man Utd on Thursday night. They are unbeaten in the last five meetings against them with three wins and two draws. However, Arsenal’s record at Old Trafford has been poor.

The London giants were on the winning side (1-0) at Old Trafford last term, but that remains their sole league victory at the stadium since 2006. Their only other win came in the 2015 FA Cup quarter-final.

Hence, they face a testing challenge in midweek, and here is how they could line up.

Goalkeeper: Aaron Ramsdale has been the undisputed choice in goal since September. The 23-year-old has put in several stand-out displays. He produced a brilliant fingertip save to deny Jonjo Shelvey last weekend when the scores were level and he’ll keep his place for Arsenal on Thursday.

Defence: Arteta chose to stick with Nuno Tavares at left-back on Saturday despite his blunder against Liverpool. The Portuguese made amends with the assist for the opening goal and may keep his place ahead of Kieran Tierney once again.

The rest of the Arsenal defence should also remain the same. Ben White and Gabriel Magalhaes are definite starters at the heart of the backline while Takehiro Tomiyasu is expected to continue at right-back after an impressive display against the Magpies that was capped with a sublime assist.

Midfield: Albert Sambi Lokonga was another player whose position was questioned after average displays against Watford and Liverpool, where he was prone to losing possession. He also stepped up his game against Eddie Howe’s side over the weekend.

The Belgian almost delivered a perfect long-range assist for Bukayo Saka. After such a performance, he appears primed to continue in the centre of the park for Arsenal alongside Thomas Partey, who starred in Arsenal’s 1-0 triumph at Old Trafford last year.

Bukayo Saka and Emile Smith Rowe have started in the wide midfield roles recently, but the former could miss out. The £58.5m star picked up a thigh injury last weekend and remains a big doubt to face Manchester United. This could pave the way for Gabriel Martinelli to make his first league start for Arsenal since August from the right side of midfield.

Martinelli came on as a substitute for Saka last weekend. The Brazilian made an instant impact, scoring within 93 seconds with a stunning volleyed goal from a Tomiyasu pass. The youngster has quality finishing skills, and should start against Man Utd ahead of Nicolas Pepe.

Attack:  Martin Odegaard did not make the most of his opportunity against the Magpies where he was dispossessed on multiple occasions. Alexandre Lacazette appears on course to return to the starting line-up to partner captain Pierre-Emerick Aubameyang up front for Arsenal.

Aubameyang has been far from his best recently. The Gabon star has squandered two penalties over the past month, though he scored one of them from a rebound. He missed a clear-cut chance in the opening half last weekend, but it did not prove costly. He needs to step up big time. 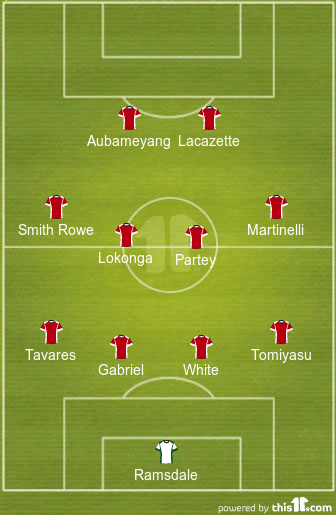