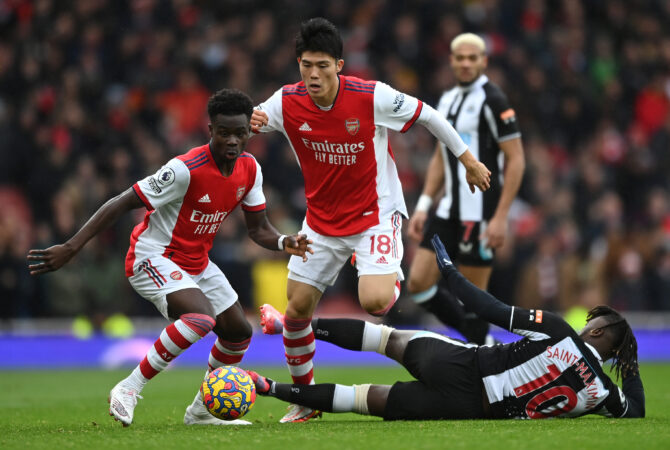 Arsenal are sweating over the fitness of Bukayo Saka ahead of Thursday’s Premier League clash at Manchester United, Daily Mail reports.

The England international sustained a thigh problem during the 2-0 win over Newcastle United last weekend, and he was substituted after the hour mark.

Following the game, Mikel Arteta confirmed the injury sustained by the club graduate, but added that he would be assessed ahead of the Old Trafford trip.

It is now reported that the north London club are still monitoring his muscular concern, and are hopeful that he has not suffered any significant injury.

The 20-year-old has been an instrumental player for the Gunners in recent years. He is currently an undisputed starter for Arteta on the right side of midfield.

His form has been inconsistent during the first half of the season, but he showed his class against the Magpies, opening the scoring in the 56th minute.

However, it seemed that he picked up the injury while unleashing his shot. He was in plenty of discomfort thereon and was substituted 10 minutes later.

As things stand, the £58.5 million-rated star appears a major doubt to face the Red Devils on the road. This could be a huge blow for the north London giants.

They have picked up five points from the last three away matches at United, but they have beaten them just once in the league at Old Trafford since 2006.

Their record against the ‘big-six’ away has been unimpressive. The victory at Old Trafford last season was their first in the league against such opposition in 30 attempts.

Arteta got the better of Ole Gunnar Solskjaer in five meetings with three wins and two draws, but there will be a new manager in the dugout for the Red Devils in midweek.

Ralf Rangnick was recently announced as the interim boss, but he has yet to receive his work permit. Michael Carrick appears on course to continue as the caretaker.

Carrick helped United secure a hard-fought 1-1 draw at Chelsea last weekend. He may prefer the same 4-3-3 set-up with the aim of catching the Gunners on the counter-attack.