Arsenal can cement their position in the top four with a win over Leeds United at Elland Road on Saturday evening. Here is the side Mikel Arteta is expected to pick:

Goalkeeper: Aaron Ramsdale kept another clean sheet during Arsenal’s 2-0 win over West Ham on Wednesday night and he’s certain to retain his place between the sticks this weekend.

Defence: Arteta isn’t expected to make too many changes from the side that kept the Hammers out in midweek. Takehiro Tomiyasu impressed once again at right-back on Wednesday night so he’ll retain his place while Ben White and Gabriel are also set to continue their burgeoning partnership in the middle of Arsenal’s defence.

The only position Arteta might tinker with is left-back if he feels Kieran Tierney needs a rest but the Scottish international is likely to keep his place ahead of Nuno Tavares.

Midfield: Arsenal dominated in midfield against West Ham so Arteta is expected to stick with the same personnel this weekend. Granit Xhaka has slotted straight back into the side since returning from injury so he should keep his place at Leeds.

Thomas Partey has endured a mixed season so far but he was back to something like his best form in midweek so he’ll be looking to build on that with another top class display at Elland Road. Albert Sambi Lokonga may have to settle for a place on the bench.

Emile Smith Rowe came on to score a fine goal against the Hammers so he’s pushing for a recall. Arteta may opt to give Martin Odegaard a breather with Smith Rowe starting in the No.10 role for Arsenal tomorrow.

Attack: Bukayo Saka was excellent last time out so he’s nailed on to keep his place as long as he’s fully fit. On the other flank, Gabriel Martinelli continued his superb form with a outstanding goal to open the scoring for Arsenal against West Ham. The Brazilian had to be substituted late on with what looked like cramp so as long as he’s fit, Martinelli should keep his place.

Alexandre Lacazette showed Arsenal they can cope without Pierre-Emerick Aubameyang as he produced a terrific display up front against West Ham – despite missing a penalty. It remains to be seen whether Aubameyang will be recalled to the squad this weekend after being axed for the last two games but the best he can hope for is a place on the bench. 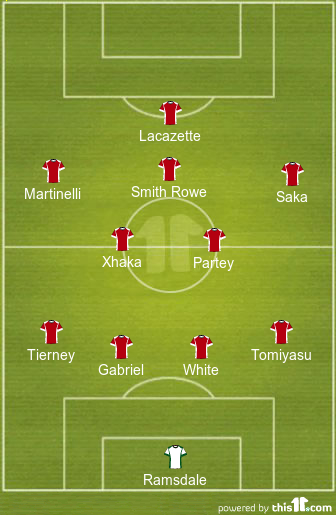