Arsenal take on Liverpool at Anfield this evening in the first leg of their Carabao Cup semi-final. Here is the side Mikel Arteta is expected to pick:

Goalkeeper: Aaron Ramsdale will be recalled in goal after being rested for the 1-0 FA Cup defeat to Nottingham Forest last weekend. Bernd Leno will drop back to the bench as a result.

Defence: Arsenal should make plenty of changes in defence with Kieran Tierney coming back into the starting eleven at the expense of Nuno Tavares – who was hauled off before half-time at the City Ground.

Takehiro Tomiyasu is also expected to return at right-back after missing the Forest game with a minor calf problem so Cedric Soares will make way. Gabriel is available again after serving a one match suspension so he should be recalled to start against Liverpool.

Rob Holding had a poor game against Nottingham Forest so he’ll be the player to drop out with Ben White keeping his place alongside Gabriel at the heart of Arsenal’s defence tonight.

Midfield: Thomas Partey and Mohamed Elneny are still at the African Cup of Nations while Ainsley Maitland-Niles has joined Roma on loan so Arsenal continue to have serious problems in midfield.

Charlie Patino had a difficult time on his full debut last weekend and Arteta will be reluctant to throw the 18-year-old in from the start at Anfield but Albert Sambi Lokonga is expected to keep his place despite being at fault for the Forest goal on Sunday.

Granit Xhaka has missed Arsenal’s last two games after testing positive for covid last week. The Swiss international will return to the squad tonight as long as the test he took yesterday came back negative.

It will be a major boost for Arteta to have Xhaka back so the Gunners boss is expected to give the Swiss international an immediate recall despite concerns over his fitness following covid.

Attack: Emile Smith Rowe missed the Forest defeat due to a niggling groin injury that he’s been carrying in recent weeks so he’ll need a late fitness test. The youngster is unlikely to be risked from the start unless Xhaka is ruled out – in which case Smith Rowe could start in midfield.

Martin Odegaard should keep his place in the attacking midfield role while Bukayo Saka and Gabriel Martinelli are expected to occupy the wide roles for Arsenal against Liverpool this evening.

However, there will be a change up front with Alexandre Lacazette recalled in place of Eddie Nketiah. Pierre-Emerick Aubameyang and Nicolas Pepe are at the AFCON so Arsenal have limited options in attack. 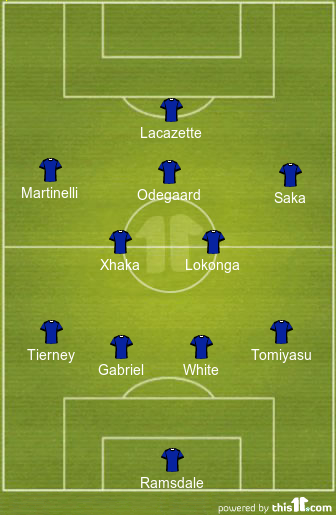