Chelsea take on Manchester City at the Etihad Stadium on Saturday lunchtime. Here is the team Thomas Tuchel is expected to select:

Goalkeeper: Edouard Mendy is still away at the African Cup on Nations so Kepa is expected to start in goal. Marcus Bettinelli will be his support on the bench.

Defence: Chelsea have been dealt a big blow ahead of the game with the news that Andreas Christensen has been ruled out of the trip to Man City after testing positive for covid.

Trevoh Chalobah remains out with a thigh injury so Malang Sarr could keep his place in the Chelsea back three along with Antonio Rudiger. Thiago Silva is expected to be recalled in place of Christensen after being rested last time out.

Midfield: Ben Chilwell remains on the sidelines due to a serious knee injury so Marcos Alonso is expected to be recalled to start on the left flank this weekend having been on the bench for the Carabao Cup win over Tottenham in midweek.

Reece James is also still missing with a thigh problem that’s kept him out in recent weeks so Cesar Azpilicueta could start on the right flank for Chelsea ahead of Callum Hudson-Odoi.

N’Golo Kante is expected to be recalled to the starting eleven against Man City after being a substitute at Spurs. Jorginho should keep his place in the middle of the park so Mateo Kovacic will be the unlucky man to miss out.

Attack: Romelu Lukaku could keep his place up front for the Blues so Kai Havertz may have to once again make-do with a place among the substitutes this weekend.

Mason Mount is likely to start in attack for Chelsea tomorrow while Hakim Ziyech may get the nod to support Lukaku in the front three. That means Timo Werner and Christian Pulisic may have to settle for places on the bench. 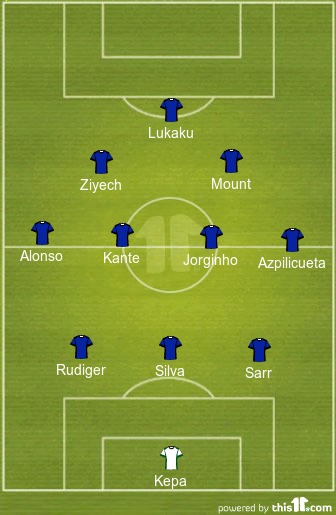