Chelsea have the chance to progress to the quarter-finals of the Champions League when they face Lille on the road on Wednesday. Here is our expected line-up

Chelsea have the chance to progress to the quarter-finals of the Champions League when they face Lille on the road on Wednesday.

The Blues secured a 2-0 win over the French champions during the first leg of their round of 16 tie. With a healthy lead, they should be favourites to continue their title defence.

Manager Thomas Tuchel is likely to revert to his preferred 3-4-2-1 system tomorrow, having played with a traditional back four against Newcastle United amid fitness concerns.

Here is how Chelsea could line up against Lille

Goalkeeper: Edouard Mendy had a comfortable game against Newcastle last weekend, registering his 17th clean sheet of the campaign from just 33 appearances. The Senegal international is expected to start in goal. He remains Chelsea’s first-choice goalkeeper over Kepa Arrizabalaga by a long stretch. Kepa could, however, feature if the tie goes to a penalty shoot-out.

Defence: Antonio Rudiger and Thiago Silva have been rested in alternative games lately, but they should play alongside each other tomorrow night. Andreas Christensen could partner them in the back three. Trevoh Chalobah has had shaky moments in recent times, and he was fortunate to not hand a penalty to Newcastle.

Cesar Azpilicueta was sidelined with a bout of illness against the Magpies, but has recovered in time. The club-captain should take up the right wing-back position over Reece James, who is doubtful with a muscle injury. Marcos Alonso was on the bench for Chelsea on Sunday after recovering from Covid. He should return in the left wing-back role ahead of Malang Sarr and Saul Niguez.

Midfield: Tuchel has regularly swapped his players in the midfield department. N’Golo Kante and Jorginho made the first XI for Chelsea last weekend. Kante should be a nailed-on starter with his tireless work rate and defensive contributions. Jorginho could likewise keep his place after a wonderful lofted pass for Kai Havertz’s late winner against Newcastle. Mateo Kovacic could feature off the bench once again.

Attack: Tuchel is unlikely to make any change up front for Chelsea with Havertz flourishing at the moment. The German has four goals and an assist in his last three league appearances. Behind him, Mount should be a confirmed starter. He has not been at his best after his ankle injury, but has been getting into superb goal scoring positions.

Hakim Ziyech got the nod to start recently, but may make way for Christian Pulisic, who has brought the best out of him in the European games. Similar to Havertz, the £40.5m star likes the big occasion. The United States international netted a wonderful counter-attacking goal during the reverse meeting against Lille. 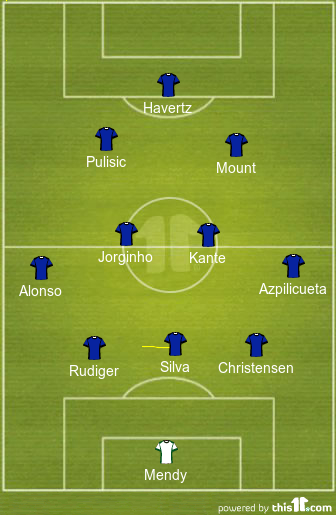